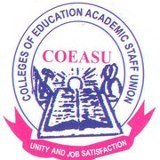 According to a press statement made available in Kano on Sunday by Comrade Abu Enesi Ajoge shortly after an Emergency National Delegates Conference, the union stated that the show down was adopted to press home its demands which it said the government had not expressed commitments.

The strike, according to Ajoge, the first to be embarked upon by the Union will be “indefinite and total, until the Federal Government meets its demands of approving the migration of officers on CONTEDISS 11 and below and other sundry issues.”

Ajoge, who also doubles as Chairman, FCE Okene branch said that the action would paralyse activities of Colleges of Education system whose Academic staff had been on strike for the last 10 weeks.

He therefore called on members to remain resolute in the face of hopelessness, stressing that “this is the time to recover the soul of the system to make it worthwhile”.