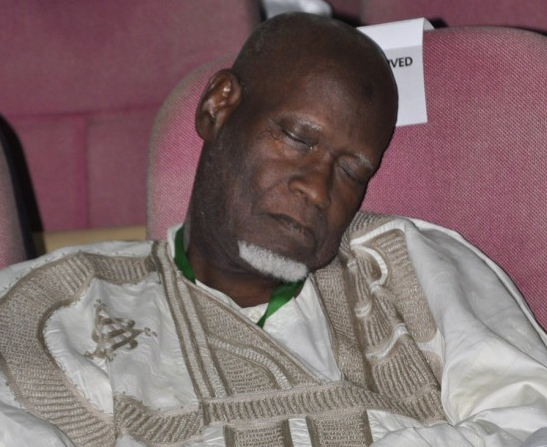 The National Conference on Tuesday supported the media reporting of delegates who were caught sleeping during proceedings at the plenary.

A delegate, Mahmud Aminu, representing Civil Society Organisations, had complained about what he termed “slanted” reportage of conference proceedings by the media.

Mr. Aminu, particularly, queried the reports of requests by some delegates for aides and the publishing of “sleeping” delegates at Monday’s plenary on page six of Tuesday’s Leadership Newspapers.

“Mr Chairman, today on page six of Leadership Newspapers, you will see pictures of some delegates published by the paper. I think the media should be called to order.

“Some of us have observed slanted reports of the conference by the media and we call on the press to be responsible in their reports”, Mr. Aminu said.

However, his observation was immediately rebuffed by most of the delegates, who said that the media had the right to report the proceedings of the conference to the public in its whole truth.

Yinka Odumakin, a delegate, cautioned against any attempt to gag the media in its reportage
of the conference.

“Mr Chairman, in as much as we are trying to ensure that the media reports accurately what is happening here, I think there should be no attempt to gag the media.

“I’ve seen the item he’s talking about; we have not been sent here to come and sleep.

“And if the media observe that people are sleeping, they have the duty to publish all the people that are doing that.

Similarly, Dan Nwanyawu, the National Chairman of Labour Party, reminded the delegates that they were at the conference for serious business and not to sleep.

“Mr. Chairman, we are here for serious business; anybody who has to sleep may take an excuse and climb the isles out to take a nap.

“But once you are here, your two eyes must be open; so if you decide to help yourself by sleeping, nobody should come here to gag the press.

“The press must report what they have seen and they are not lying by what is on page six of Leadership.

“They (media) have just said the truth, the whole truth and nothing but the truth. So if we are here to do business of nation building, we must be serious.

“With due respect to our elder statesmen; honestly, I see most of them awake.

“But if you have any reason to take a nap due to health challenges, please don’t do it here (in plenary) because the press will get you and they have the right to publish same”.

The submissions of the duo attracted a thunderous applause and were overwhelmingly supported by the delegates.