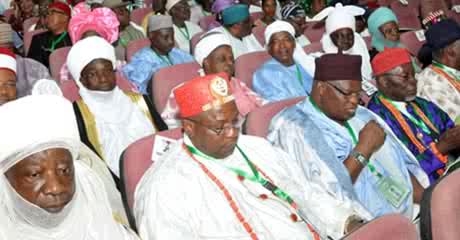 The Movement for the Survival of the Ogoni People, MOSOP, has urged northern governors and other leaders in the region to have a change of heart on their plan to resist issues relating to resource control and creation of new states at the ongoing National Conference.

MOSOP President, Mr. Legborsi Pyagbara, who made this known in a statement signed by his Media/Public Affairs Advisor, Mr. Bari-ara Kpalap, said that the northern sentiment on the issue of resource ownership, control and state creation revealed ulterior motives.

Pyagbara stressed that the position of the northern part of the country on the issue could jeopardize the North/South relationship, adding that it was wrong for the North to always vent its opposition to national matters with threats.

He further stated that the Ogonis’ participation at the National Conference was mainly to pursue its interest in state creation, resource control and ownership, environmental remediation, restoration and protection.

The statement reads in part: “As the National Conference progresses, the apex organization of the Ogoni people, MOSOP, has called on the people of northern Nigeria, including its delegates to the conference, elders and governors to rescind their planned resistance to issues of state creation, resource ownership and control supported by the South.

“The expressed northern sentiments no doubt betrayed sinister motives, which in our view, may not augur well for the conference and North/South relationship.

“It is alarming that at crucial times in this country such as this, the North has been behaving as if other parts of the country are mere vassals that have no real legitimacy and rights and must subject to their whims and caprices.

“Our bitter experience has been that any time that the North wishes to get its way against the interests of other nationalities in Nigeria especially on the issue of resource ownership and control, it emphasizes that the present arrangement impoverishes the North and would vent its opposition with threats.

“It is painful to note that when groundnut was the mainstay of the economy, they controlled benefits that accrued therefrom and communities outside of their region especially those of the Niger Delta accepted it in good faith”, Pyagbara stated.

He warned that the North’s resort to hiding behind international laws would not put it (North) in better stead against the position of MOSOP.