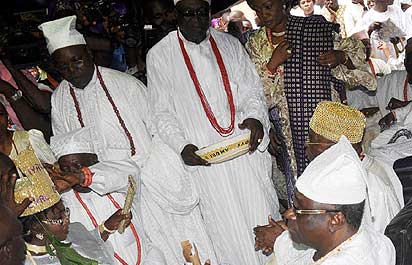 The Iyaloja General of Nigeria and President of association of commodity market women and men of Nigeria, Mrs. Folashade Tinubu-Ojo, has rejected the names of delegates contained in the list recently released by the Federal Government to represent market women at the national conference, saying the representatives are unknown as market women leaders.

She said: “It is dead on arrival! We call on the Federal Government to quickly adjust this anomaly before the conference commences”.

In a statement in Lagos yesterday by Iyaloja-general on behalf of all market women and men across the country, Mrs. Tinubu-Ojo wondered how the presidency came up with the names of the purported representatives of the market women, considering the fact that only one among the six delegates, Mrs. Felicia Sanni, is the only known and recognised market women leader.

According to her: “With the exception of the earlier mentioned market leader, the under listed women according to the delegates list just released by the Presidency, none of the women is known within the market women associations across the country”.

An Abuja based pastor, JS Yusuf who also doubles as the senior pastor of Touch for Recovery Outreach International has stunned many after releasing...
Read more
- Advertisement -