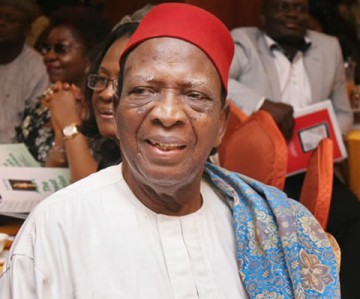 The President of the Movers of Nigeria, Mr. Ifeanyi Okonkwo, yesterday decried the non-participation of constitutional lawyer, Prof. Ben Nwabueze, SAN, at the national conference, which will be inaugurated later today (Monday) in Abuja.

Okonkwo, who made this known in Enugu, said noted that most people had yet to come to terms with Nwabueze’s decision not to participate in the conference.

President Goodluck Jonathan had earlier appointed Nwabueze as member of the Presidential Committee on National Dialogue but he turned down the appointment, citing his ill-health. When he was also chosen by Ndigbo alongside former Vice President Alex Ekwueme to lead Igbo delegates to the conference, he also turned down the offer, citing old age. He is 83-years old.

But Okonkwo flayed the elder statesman’s decision, saying, “They have been trying all these years through the late Chief Rotimi Williams, to right the wrongs, which they perpetuated on Nigerians in the 1979 Constitution. Chief Williams and other intellectuals, including Nwabueze, were the people who introduced the presidential system of governance in Nigeria. Therefore, they seem to have seen their folly.

“They kept talking about a conference to rewrite a brand new constitution. They need also to confess that we had a viable 1963 parliamentary constitution that Nigeria was using. All of a sudden, we were told that the executive presidency is what Nigeria, that is a multifaceted society, requires.

“Now it was Nwabueze’s idea, even President Goodluck Jonathan was not an apostle of the conference. Because the agenda that brought Jonathan was an agenda of equity and equalisation of citizenship rights, why should an Ijaw minority man not take power, if by the succession plan, he ought to be the President”.

Okonkwo said he regretted that the eminent lawyer abandoned that responsibility, saying, “If Nwabueze were a good architect, then he is not a good student of history”.

He added, “That was an opportunity for him to go and deliver the baby he wanted. Now they have taken us back to letter writing again. These are the critical issues because he had the opportunity.

“He is no longer sick. He is no longer dying. Now he is back and telling them that this was not our idea. But he had an opportunity; Jonathan gave him the power”.