Home Lifestyle Could You Be Dating An Alcoholic? Few Signs To Look Out For…
Facebook
Twitter
WhatsApp 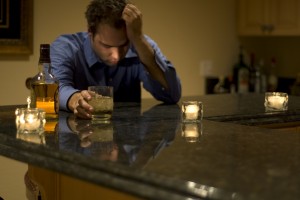 Picture it: You’re sitting across from your date at dinner, looking forward to all that the rest of the evening has to offer — and then he orders another drink. And another. You cringe slightly as he starts getting a little louder and more playful. A quick word to the wise: Watch out for the inevitable date who’s an alcoholic.

In today’s day and age, people can get addicted to an almost endless range of substances: alcohol, heroin, cocaine, marijuana, pills, and so on. Yet one of the most common types of addiction that you may see in dating is alcoholism. If you cross paths with someone who has an alcohol problem, the question then becomes, what will you do with that information?

As you meet and – let’s be honest – interview various dates en route to finding your long-term partner, you need to know how to spot someone who uses alcohol in an unhealthy way. For example, having a couple glasses of wine at dinner is probably no big deal, but a third and a fourth? That’s another story. It’s natural to have a drink or two to stave off the inevitable anxiety that comes with date night, but anything more than that tells you that this is someone who relies on alcohol to a fairly extreme degree. In such cases, he uses alcohol to balance his mood, feel happy, and relax. The simple truth is that a glass of wine or two helps you relax; anything more than that is unhealthy coping with issues of which you’re not yet aware.

Sometimes the signs aren’t so obvious.

Sure, if someone orders five beers over the course of the night, you’re going to ask yourself, I hope, is he an alcoholic? But a good alcoholic will also know how to hide the severity of his problem so that you don’t run for the hills. In such instances, listen to the content of what he talks about. Does he talk about drinking? Does he tell stories about events where you imagine he was probably drinking? Does he mention being hung over?

Notice the way he drinks.

Does he suggest that you take shots of liquor? Shot-taking is something that many young men and women do, but as they mature and grow into adulthood, this behavior becomes far less common. The average adult who regularly takes shots of liquor when he’s out on a date or with his friends is someone who uses alcohol in an unhealthy manner. The whole point of shots is that the person taking them can get intoxicated as quickly as possible, and that shows a serious reliance on alcohol to cope. If you’re on a date with someone who suggests that you take shots together, pass and say that you don’t need it. Most importantly, watch how he responds to the fact that you’ve declined. Does he still take shots by himself? Does he egg you on to take a shot, too? Does he think for a minute and refrain from taking one himself?

Tell him how you feel about drinking alcohol.

Many women enjoy having a drink here or there, but they don’t necessarily want to get drunk on the average date night. Early in the dating process, it’s good to tell him your views on alcohol and drugs. If you’re not a big drinker and don’t want to be with a big drinker, tell him from the start in a nice, gentle way. Again, watch how he responds and take note of any defensiveness.

No one wants to believe their new guy is an alcoholic, so any sense you have that he might have a drinking problem is a cause for concern. If your instinct or gut, as some folks say, tells you that he might have a problem with alcohol, odds are that you’re right. If you have such a suspicion, don’t wait around a few more months to prove it. It’s certainly your right to mention your concern to him or ask him directly if he thinks he might have a problem, but whatever he says doesn’t mean much when your instinct – the most powerful self-protective mechanism you have – tells you there’s a problem. The most important thing to remember in dating is to move on when you come across someone who doesn’t meet your needs. Always remember that waiting or hoping that kind of behavior can change is distorted, wishful thinking.

Bottom line: The ugly truth is that alcoholism and drinking issues wreck a lot of romantic relationships. If you end up in a relationship with an alcoholic, you’re co-signing on months – even years – of frustration, anxiety, and disappointment. You will always feel that he prioritizes alcohol over you, and you’ll be right: The drug of choice trumps everything in the lose-lose game of addiction.