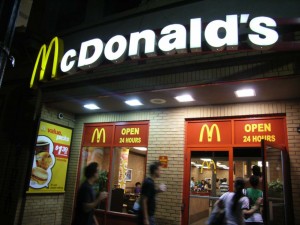 87-year-old Carl and 81-year-old Barbara Becker of Rixeyville, Virginia made headlines when news of their letter to the editor, detailing an episode at the Culpeper McDonald’s, spread and eventually got them free meals for life. The couple says that fast food employees kicked them out of the restaurant because they were sitting “too long.”

The pair were enjoying their regular routine of a mid-afternoon McDonald’s snack they call “scrunch” (between supper and lunch), when they were stopped by an employee cleaning up. Ms. Becker told WTTG Fox 5, “The dust started kicking up and it was just flying everywhere and she says, ‘Does this bother you?’ And I said, ‘Only if you like to eat dirt does it not bother me.’” After the incident with the Mickey D’s employee, the manager approached. “He says, ‘You two have to leave. Your half hour’s up and we have to clean this floor,now,’” recalled the great-grandmother of 16. Carl told WJLA ABC 7, ”I never had an experience like that in my life.” WTTG reported that they found no signs at the McDonald’s indicating a 30-minute time limit.

The couple left the restaurant and kept their attitude of going with the flow and laughing things off, but not before Barbara let the manager know he needed some additional training. When they returned home, Carl drafted his letter to the editor and sent it off to the Culpeper Star Exponent.

Once the letter was printed, the story quickly spread across social media. One of the people who saw the Beckers’ story was Shawn Moss, owner of Shawn’s Smokehouse BBQ in Culpeper. Moss says he believes strongly in customer service and wanted to do something for the couple. He decided to offer the octogenarians free “scrunch” one day a week, for life. Remembering that Carl was a World War II veteran, Moss said, “We’re also going to do a ‘Scrunch Day’ on Wednesday, and offer free coffee to all seniors and veterans.”

As an apology, McDonald’s corporate offered the couple two free small coffees, but Ms. Becker sent the coupons back. The Culpeper McDonald’s franchise owner, Bob Drumheller, issued a statement which read, “I care deeply about the comfort and satisfaction of my customers. My organization takes these matters seriously, and is investigating the customer’s claims. I have also reached out to the customer to extend my apologies for this misunderstanding. Our focus will continue to be on serving our customers and providing them a welcoming experience.”

The Beckers received a call from Drumheller and Barbara explained, “They said they intend to continue the training and he says he wants me to be a part of his training so that I can help him do it right. I said, ‘I’m doing it right now.’ This is the training.” The couple say they will still eat at McDonald’s, just not the Culpeper location.