Couple Sleeping in Dustbin Get Tossed in Garbage Truck 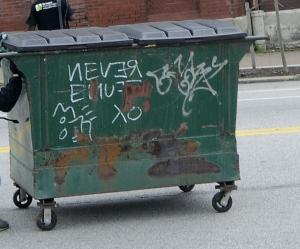 A Spokane couple who were sleeping in a dumpster with their dog early Tuesday morning got a rude awakening when a garbage truck picked them up and dumped them in back.

According to City of Spokane Solid Waste Department Supervisor Rick Highes, the truck driver pulled over when he saw a bag of garbage get tossed and heard sounds coming from the rear of his vehicle. “When he noticed the box fly off, he thought he heard some yelling and pounding so he pulled over,” Hughs said.

It was a lucky occurrence, as many garbage truck drivers wear ear plugs. After the driver called 911, firefighters found the three occupants in the back of the garbage truck.

“I parked my car and I heard yelling. Like ‘help me, help me please’ and ‘get me out of here!”’ witness Ann Jorgensen told KREM. “We saw the back of the garbage truck open up, they were throwing out the garbage and people were climbing out from the ladder.”

The man and woman were taken to the hospital and later released with cleans bills of health. KHQ News reported that the dog is fine as well.