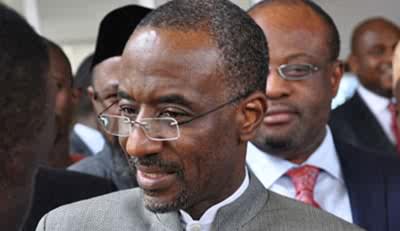 The judge, Justice Gabriel Kolawole, said that he would entertain both the respondents’  preliminary objection and the originating summons filed by counsel to Sanusi on April 8.

President Goodluck Jonathan and Lamido Sanusi
Kolawole adjourned the case after hearing the submissions of counsel on whether or not the court had jurisdiction to entertain the suit.

“The drafters of the law did not state categorically which case can be determined by taking both the preliminary objection and originating summons together.

“In the instant case, where time is of essence, so that the plaintiff’s tenure does not expire before the case is determined, the court rules necessitate we hear both applications together.

“By Order 1 Rule 4 of the Federal High Court, it is judicially expedient that the hearing of the originating summons be heard with the preliminary objection,’’ Kolawole said.

Sanusi had on Feb. 24, through his counsel, Mr Kola Awodein (SAN), challenged his suspension by the president.

President Jonathan, Attorney-General of the Federation and Inspector-General of Police were joined as co-defendants.

Sanusi had in an originating summons prayed for interlocutory injunction restraining the president from suspending him and for the court to reinstate him as CBN Governor.

The suspended CBN governor also prayed the court to declare his suspension as a nullity pending the determination of the suit.

At the resumed hearing of the matter on Wednesday, Sanusi’s counsel had prayed the court to hear both the originating summons and the preliminary objections together.

But the president’s counsel, Mr Fabian Ajogwu, (SAN), in his preliminary objection, challenged the jurisdiction of the court to entertain the suit.

Ajogwu argued that by virtue of Section 254C (1) (a) of the 1999 Constitution of Nigeria, as amended, the Federal High Court lacked jurisdiction to entertain the suit.

Mr Mike Ozekhome (SAN), counsel to the Attorney-General, had also aligned with Ajogwu’s arguments on jurisdiction.

Ozekhome argued that taking the two processes together tantamount to the court overruling the preliminary objection, while the court, in fact, lacked jurisdiction to entertain the suit.

“I urge My Lord to wash his hands off the case like Pontius Pilate did,’’ he said.

He said that the law vests such power in the National Industrial Court as the dispute between the plaintiff and the president relates to matters arising from the plaintiff’s employment. [NAN]