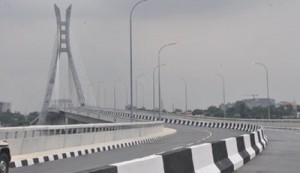 A Federal High Court sitting in Ikoyi, Lagos State has nullified the collection of any toll or tariff on the Lekki-Ikoyi Bridge.

Presiding judge, Justice Saidu, held that the power of control over all navigable waterways in Nigeria resides in the Federal Government, and not any state government.

According to the judge, from all the documents made available to the court, the only justification for the toll fee on the bridge by Lagos State is the private partnership law.

He noted however, that the law could not apply to the Lekki-Ikoyi Bridge since it was built with the money of the Lagos State Government, without the involvement of any private partnership.

“Thus, since there is no law supporting the toll fee, it is illegal and should be stopped forthwith”, Justice Saidu said.

“The further counter affidavit of the third and fourth respondents, and the response of the first and second respondents, have answered most of the questions before this court.

“The second respondent National Inland Waterways Authority (NIWA) is the only federal agency to form and regulate navigable waterway in the country, in line with the NIWA Act.

“The applicant did not contest this issue, but only goes further to raise the issue of collection of toll from the subject matter.

“The third respondent tried to justify the collection of such toll in paragraph 26 of their counter affidavit, by stating that when the bridge is erected, its proceeds will be applied to the consolidated revenue fund of the state.

“The question now is, has the state made the appropriate law to enable her collect such toll on the bridge?

“The third respondent only cited sections 27, 28, and 29 of the state Public Private Partnership Law 2011 as making provision for the collection of revenue.

“There is nothing before me to show that the subject matter in this case was as a result of any Public Private Partnership law, to enable the law of 2011 be extended.

“The fact before this court is that the bridge was built with the third respondents money.
“I agree and uphold the construction of the bridge, and the power of the LASG to generate revenue there from, but the existing laws does not cover it.

“I therefore hold that the third respondent can only make a law to that effect, before it can collect tolling on the Lekki-Ikoyi bridge,” the court held.

Joined as first and second respondents are the Attorney General of the Federation, and the NIWA. The Attorney General of the state, Mr. Adeola Ipaye, and the state government, are third and fourth respondents respectively.
Adegboruwa had filed the suit on November 26, 2012, for a declaration that the state government had no authority to erect a bridge, on the lagoon which is categorised by law as federal navigable waterways.

He had also sought a determination of court as to whether there existed any law in Nigeria, authorising the collection of such tolls, tax or fee from citizens.

Adegboruwa therefore wanted the court to declare that the imposition of such tariff on road users is an illegal form of taxation and is inconsistent with the Constitution of the Federal Republic of Nigeria.

Responding to the ruling, human rights lawyer, Ebun Adegboruwa, who filed the suit, commended the courage of the judge, especially against the background of the impunity that citizens are being subjected to all over country.

“Coming a day after the same court nullified the imposition of new number plates, this judgment should be an elixir to all Nigerians to challenge in the court, all illegal taxes and arbitrary charges in the name of road tax, PHCN metre maintenance charge, estimate bills without electricity, and so on,” he said.