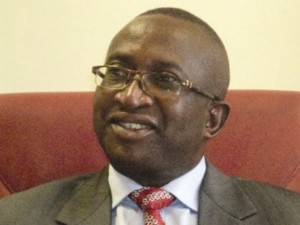 The Senate Leader, Victor Ndoma-Egba (CRS-PDP), says he will seek the mandate of his constituency and party for a fourth term in the Senate in 2015. He said his state and constituency stand to lose if he is not returned.

Mr. Ndoma-Egba, who represents Cross River Central Senatorial District, made this known in an interview with newsmen in Calabar on Sunday. He said such mandate would be beneficial to Cross River if the PDP obliged him.

The lawmaker is said to be having a running battle with the state governor, Liyel Imoke, over the governor’s plan to vie for the same seat. Mr. Imoke would have completed his constitutionally permitted two-term as governor in 2015. Both men are from the same senatorial district.

Mr. Ndoma-Egba said it was not necessary to recount everything he had so far done for or attracted to his constituency as that could be seen as blowing his own trumpet.

The Senate leader said that he had done much for his constituents as a mark of service and responsibility.

Mr. Ndoma-Egba said he was, however, not desperate for a fourth term ticket, adding that if he failed to actualise his desire, he could always go back to his legal practice.

“If I am given the mandate by my people and the PDP, it will benefit the state and my constituents. It is not all about me. I have empowered my constituency.

“More than 500 students have benefited from a scholarship programme I started before becoming a Senator. I have attracted a water project from the World Bank, various road projects and so on to my constituency.

“I am not, however, desperate. If I do not go back for the fourth term, I can still go back to my lucrative law practice. I am a Senior Advocate of Nigeria (SAN).

“But in this case, who suffers – Cross River State, my constituency. This is because it will take time for another legislator from this state to rise to the position of Senate Leader.

“If I am obliged the mandate to go back to the Senate of the Federal Republic of Nigeria, who knows, I can get something higher and attract more benefits to Cross River State”, the Senate Leader explained. (NAN)