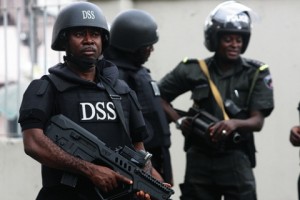 Boko Haram militants detained at the State Security Services facility in Abuja took over the complex for over six hours after disarming SSS agents guarding the facility, according to a report by Saharareporters.

The audacious action of the detainees led to prolonged negotiations that later resulted to shootings at the complex for over 4 hours, Saharareporters said, quoting SSS sources.

The gunfight at the complex known as “Yellow House” caused panic in Abuja as the complex sits close to the Presidential Villa and one of the most fortified areas in the national capital.

While some reports say the attack came from within, after detained members of the Islamist sect disarmed agents guarding the detention facility, others say the attackers stormed the SSS complex on Sunday morning to free their comrades being detained by the security agency.

Soldiers and their Air Force counterparts were drafted in some few hours later to bring the insurrection under control.

Following the attack, various points in Abuja city as well as some roads leading to the nation’s capital are under lock down, with military helicopters deployed around the city.

“What happened was that the suspects handlers went to feed the detainees here but suddenly they attacked him with their handcuffs, disarmed him and started shooting,” a spokesperson for the SSS said.

“The military was quickly called in before they could do any harm and that is responsible for the shootings you heard.

“It was an attempted jailbreak but it has been brought under control,” the spokesperson said.

Former Aviation Minister, Femi Fani-Kayode however had a different story, as he claimed what went down was a full-scale battle.

Fani-Kayode, who took to Twitter to air his own version after the attack said, “I live 50 metres away from the SSS headquaters and the Villa and what I witnssed with my eyes and heard this morning was a full scale battle”.

Deaths or injuries as a result of the incident cannot be immediately confirmed.