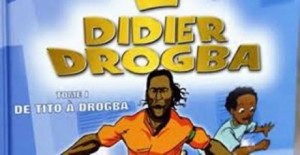 Days after Paul and Peter Okoye of P-Square launched a family oriented animated series titled ‘The Alingos’. Ivorian striker, Didier Drogba, has also revealed his plans to launch a cartoon series of himself titled ‘From Tito to Drogba’.

The cartoon series will show details of Drogba’s early life and how he achieved his dreams of becoming the icon he is today.

Speaking to sport daily L’Equipe, the player said, ‘It is a fun way to learn lots of things about me and to show young people that, if they do what I did, they can achieve their objectives.’

‘The most important thing is to show you can exceed your dreams. For me, football has become my job, my way of making a living, and that in turn has allowed me to meet many famous people, to be a UNICEF ambassador,’ he added.

We gathered that the man responsible for the project, Gabin Bao, has spent years on the project.

‘I met him several times after we did the deal and he really liked the idea of sending a message to young Africans. The script for the book flirts with caricature at times in its emphasis on the role of hard work in Drogba’s ascent,’ Bao said.

‘Some people say I’ve made him too perfect. But he is like that. He is very careful about his image because he has a lot of responsibility on his shoulders.’

Editions are being planned for release in Britain, where Drogba is still idolised by supporters of his former club Chelsea; Brazil, where he is due to play in the World Cup later this year, and Turkey, where he currently stars for Galatasaray.