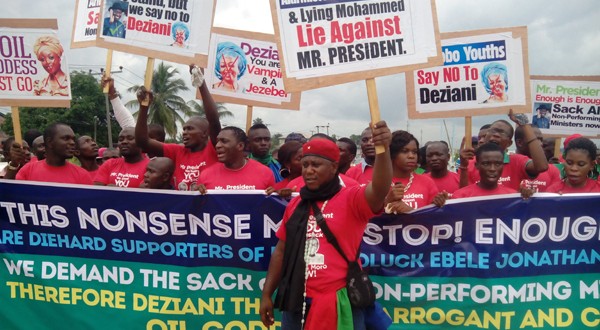 Hundreds of youths under the aegis of the Niger Delta People’s Salvation Front (NDPSF) yesterday disrupted smooth flow of traffic on the ever-busy DSC Expressway, Efunrun, Delta State, as they called for the heads of two ministers in the present administration.

The protesters, led by Rex Anighoro, spokesperson of the NDPSF leader, Mujahid Dokubo-Asari, said they would take the protest to Abuja, if President Goodluck Jonathan fails to sack the embattled duo of Diezani Alison-Madueke (Minister of Petroleum) and Abba Moro (Minister of Interior Affairs).

The protesters, dressed in red T-shirts, imprinted with pictures of Alison-Madueke and Moro, also carried banners and placards some of which read “Diezani, You are a vampire and a Jezebel”, “Mr. President enough is enough. Sack all non-performing ministers now”, among others.

They said youths supported President Jonathan and planned to stand by him no matter what, but noted that he has to sack the aforementioned ministers.

Anighoro said the petroleum minister had ‘exhibited recklessness’, while the Interior minister had shown he has no value for life.

“We want to say we support Jonathan and we intend to stand by him, but Alison-Madueke and Moro must go.

“These people have given the opposition things to say against the president. If this is not heeded, we shall take this protest to Abuja and other places.

“It is a shame that a nation as Nigeria can’t carry out a simple recruitment without wasting lives.

“The Petroleum minister has let us down. Our mothers in the villages cannot afford three square meals. Diezani must go.

“We, the youths of the NDPSF, in collaboration with youths from all parts of Delta, have come to demand that these ministers resign or be sacked by Mr President”, Anighoro said.

The protesters were made up of Youths from the Ijaw, Urhobo, Anioma and other tribes in the state.