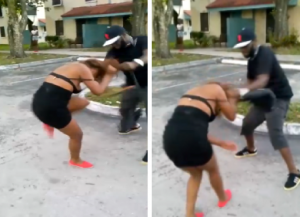 While this jaw-dropping incident may seem highly distasteful and disturbing, unfortunately it actually happened. According to World Star Hip Hop, a father was involved in a physical altercation with his 13-year-old daughter. Although the video clip is only 19 seconds, it definitely speaks volumes.

The urban site reports that a man beat his daughter in the street as a form of discipline for her rebellious behavior. He claims that he was reprimanding his daughter who had been “missing for three days.” The teenage girl’s parents alleged that she’d been intimately involved with a number of teenage boys during her disappearance, and the evidence was posted to her Facebook account. However, her name was not revealed.