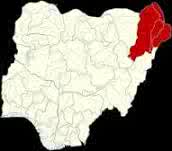 A female student of the Borno State college of education, Waka, in Biu LGA of the state was said to have been slaughtered by suspected Boko Haram insurgents on Friday.

Details of the attack could not be immediately confirmed as recent attacks of greater magnitude seem to have overshadowed the Waka attack.

A resident of the town however told newsmen that the girl’s body was found on Friday, with the manner of her death reminds of past attacks by dread Islamist sect Boko Haram.

Meanwhile, twin explosions reportedly killed about 100 people, some of them football fans, in Maiduguri, Borno state capital on Saturday.

The first explosion was said to have killed dozens of the fans in a ‘viewing centre’ when suspected improvised explosive devices (IEDs) were detonated at about 6pm.

The second explosion, it was learnt, went off as rescuers rushed to the scene, killing many more.

According to an eye witness, fans were watching football in a ‘viewing centre’ when the explosion occurred.

“The explosion apparently left about 70 dead,” the eyewitness said.

The blast was said to have attracted many people nearby including wedding guests who launched a rescue operation.

“Moments after the rescue operation got underway, another explosion went off, killing many more and wounding several others.”

The eye witness believed the second explosion was detonated from two pick up vans disguised as selling firewood.

“As I am talking to you now, we have counted over 70 corpses. Even then, some have been taken to hospital, dead or injured. We probably have at least 100 dead,” he added.