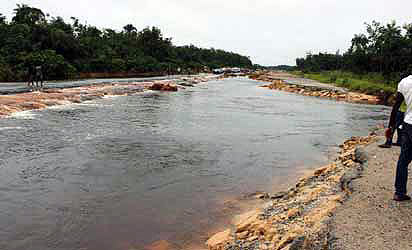 Mr Mohammed Barsha, the Permanent Secretary, Ministry of Niger Delta Affairs, on Wednesday assured that a substantial part of the East-West Road in Port Harcourt would be completed in 2014.

Barsha gave the assurance in an interview with the News Agency of Nigeria (NAN), while inspecting the project being executed by the ministry.

He said the ministry was ready to spend on the road eight per cent out of the 78 per cent of its 2014 budget allocation meant for capital projects.

The permanent secretary said the Niger Delta terrain and non-compliance with relocation orders by traders in Nbiama, a village in Rivers, had posed challenges to the completion of the project.

“The ministry has been consistent in saying that the East-West road will be completed in December 2014. We had earlier hoped that there would be enough funding to achieve that target”, he said.

NAN recalls that the Supervising Minister of Niger Delta Affairs, Mr Darius Ishaku, recently decried low allocation to the ministry in the 2014 budget.

While defending the ministry’s budget for the 2014 fiscal year at the Senate Committee on Niger Delta Affairs, the minister said the N49.2 billion proposed for it was inadequate.

He said it was “inadequate in view of the ministry’s enormous responsibilities”.

Ishaku said the completion of the road alone was expected to cost N111 billion.

NAN reports that N8.73 billion was provided for the completion of the project in the 2014 budget proposal for the ministry. (NAN)