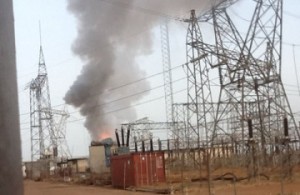 A section of the National Control Centre of the Power Holding Company of Nigeria (PHCN), Osogbo which provides electricity for Osun, Oyo, Kwara and Ekiti States was Friday day gutted in an early morning inferno.

The fire which started at about 2.00am could not be put off until 9.00am, throwing residents of the area into pandemonium.

It was learnt that some residents of the area moved to other parts of the town in the midnight when all efforts to put the fire out could not yield positive results.

Sources familiar with the situation said the fire was as a result of technical hitch at the centre.

The state Deputy Governor, Mrs Grace Tomori who visited the scene of the incident at 3.30 am allayed the fear of the people of the state that the incident was caused by members of the Boko Haram sect, saying that the state government would investigate the cause of the ugly incident.

It was gathered that it took the combined efforts of the officers of the State Fire Service, Nigerian Security and Civil Defence Corp and the Nigerian Army before the fire could be put out.

Properties worth millions of naira were lost in the inferno which lasted for several hours.

Most parts of the state had since been thrown into darkness, with the situation expected to persist until necessary repairs are made or the damaged items replaced by the PHCN.