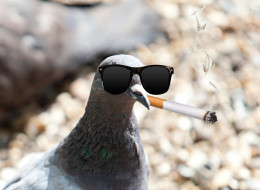 Fire officials in London say that a blaze that torched the roof of a house on Wednesday and forced the evacuation of nine residents was likely caused by a pigeon who retrieved a lit cigarette butt and dropped it in its nest.

“When we got up into the roof, we were baffled as there were no obvious ignition sources,” London Fire Brigade investigator Matt Cullen told the BBC “The smoking gun was found when we discovered a partially burnt birds nest.”

Neighbors said they had previously seen a bird flying in and out of a hole in the buildings roof.

According to the Guardian, four fire engines and 21 fire fighters responded after the building went up in smoke just after 10:20 p.m. on Wednesday night. No one was hurt in the fire.

The website pointed out that birds toting cigarette butts have sparked fires before. A blaze last year was apparently started when a pigeon dropped a smoldering cigarette down a chimney.