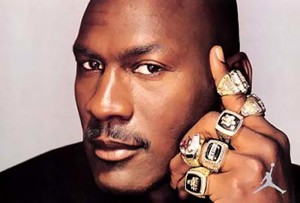 Michael Jordan played in his last NBA game more than a decade ago, but that doesn’t mean his earning power has waned at all.

According to Forbes, Jordan was the highest paid retired athlete in 2013, earning an estimated $90 million.

What was the catalyst behind Jordan’s impressive earning power? Shoes. Nike’s Air Jordan line of footwear continues to sell like it’s the summer of 1991.

Nike made $300 million on LeBron James’ line of shoes in 2013, according to Forbes, but that comes nowhere near the $2.25 billion the company raked in for Jordan’s brand.

Jordan’s estimated $90 million cut is more single-year money than he ever earned during his playing career, which Forbes said peaked at $80 million in 1997-98.

Forbes reported that increased sales of the Air Jordan line have led to the big payout for the former Chicago Bulls great.

One in every two basketball shoes sold in the U.S. comes from the Jordan label, and Nike continues to aggressively push the brand — it opened it’s first Jordan-only brand store in New York earlier this month.