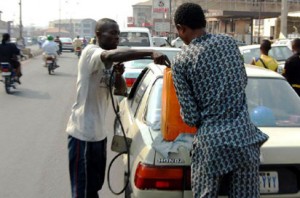 The fuel scarcity being experienced all over the country is biting harder in Plateau State as fewer filling stations have fuel to sell to the public.

Although most residents have had to rely on private stations who sell at between N120 and N125 per liter, some of the stations for about two weeks now have also been closed for lack of supply.

As at Wednesday, only NNPC mega station along Yakubu Gowon Way in the state capital was selling while virtually all stations belonging to major marketers were without fuel.

A dealer for one of the major marketers said the little fuel that comes is being rationed on rotational basis to keep the stations going.

“We had one truck yesterday and it was shared to three stations. When another truck comes, it will be shared and we go round like that”, he said.

He dismissed allegations of hoarding leveled against marketers saying if supply was sufficient there would be no reason for anyone to do so.

Motorists and others who use petrol for their business lamented that the scarcity had imposed additional financial burden on them as they buy fuel from the ‘black market’.

Meanwhile, the scarcity seemed to be subsiding in Lagos yesterday as there were fewer cars and shorter queues at filling stations.

As the scarcity leaves many vehicle users helpless, they end up buying fuel from black markets despite the risk of buying aldulterated product involved. The situation of things at the moment gives motorists no choice as the scarcity continues.

A statement by the Nigeria Labour Congress (NLC) president, Abdulwaheed Omar during the week decried that the scarcity has slowed down productivity and its attendant effect on service delivery and production within the economy.

“While importers claim the unnecessary delay in obtaining import approvals from the Federal Government, which enables them import the products early enough to meet up with public demands, is the cause of the scarcity; the NNPC insists the products are available, but the marketers are hoarding products to deliberately increase prices.

“The recent announcement by the Nigerian National Petroleum Corporation NNPC that it has supplied 50 million litres of fuel to marketers and intensified its monitoring exercise to check hoarding of the product has not ameliorated, but heightened the sufferings of Nigerians as prices have continued to skyrocket with a litre of fuel selling between N500 – N800 in the parallel market.

“It is bad enough that our country have to be importing products it produces, and scandalous that government have not been able to fix the rots in the petroleum industry despite promises publicly made by successive governments between 1999 and now.

“We believe the government can do better by immediately bringing supplies of these products to its normal status because the economy may be halted soon should the scarcity continue.