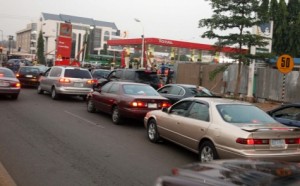 Petroleum industry officials had last week blamed the worsening fuel scarcity across the Lagos metropolis on the recent oil spill at the Ijegun area of the state.

The spill which flooded over 300 houses in the area, forced the officials of the Pipelines and Product Marketing Company (PPMC) to lock the valve so as to forestall further spill.

The arising shortfall in the supply of the product had triggered a wave of scarcity, a situation many would think should be over now. Scarcity however persists in Lagos. In fact, it got worse on Friday with queues noticed at the few filling stations that sold Premium Motor Spirit (PMS). There were also rumours, Friday, that some filling stations sold fuel more than the normal pump price of N97.

Long queues were noticed on several filling stations along Ikorodu road. There were also reports of scarcity on some parts of the Island.

On his part, President of the Independent Petroleum Marketers Association of Nigeria (IPMAN) has linked the lingering fuel scarcity across the country to the delay of cargo ship awaiting clearance at the high sea by security operatives.

“I totally disagree with insinuations that marketers are hoarding products at the filling station,” Abdulkadir Aminu said in Abuja on Thursday.

No one is sure for now what has caused the scarcity which is fast spreading across Lagos. Lagosians will however be hoping things go back to normal over the weekend.