A young father-of-one who had a common cold has lost three limbs and half his face to what turned out to be a horrific flesh-eating bug. 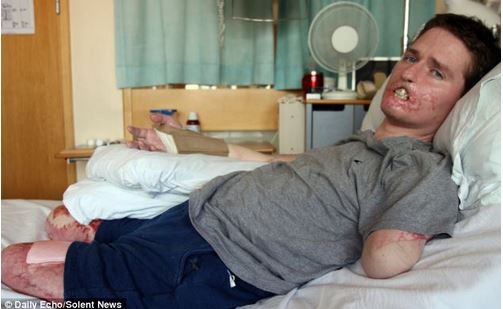 Alex Lewis, 34, had to have both legs and his left arm amputated after his feet, fingertips, arms, lips, nose and part of his ears turned black.

His major organs shut down and Mr Lewis, who has a three-year-old boy called Sam, spent a week in a coma as the deadly bacteria wreaked havoc through his body.

It all started as a common cold four months ago, but medics soon diagnosed the blood infection Group A streptococcus – a normally harmless bacteria the body should filter out.

But devastatingly, in Mr Lewis’s case it developed into septicaemia and toxic shock syndrome and doctors warned he had a three per cent chance of survival.

But he survived and hopes one day to walk again on prosthetic ‘blade runner’ legs.

“In a strange way it is the most amazing thing I have ever lived through. I think nothing but good will come from it. I think you cope because you have to. If you don’t, chances are you will probably die. We have all got a resilience within us but it just doesn’t get tested.

“I’ve learned along the way that all the quadruple amputees I’ve met through either war or illness say the one thing they’d kill for is a hand. So I was very lucky that surgeons here could save it.”

Mr Lewis said his three-year-old son Sam’s reaction when he lost his lips was worse than the excrutiating pain and the 14inch scar on his back from the operation.

“He thought it was chocolate on my face and so when I lost my lips he refused to go near me. He could get his head around the legs and the arm, but then last Saturday he came the closest he’s come to me since it happened. I put my arm stump out and touched him and I said, “Look at that” and he said, “No, get off”. But then I flexed my bicep even though it was agony and he just fell about laughing, he absolutely loved it.”

The victim of the horrible disease concluded: