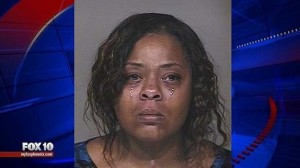 Shanesha Taylor, 35 faces child abuse charges after police said she left her 2-year-old and 6-month-old sons in a car while she went for a job interview.

According to police, someone heard a child crying inside a Dodge Durango parked in a Scottsdale, Ariz. office complex parking Thursday afternoon.

Police said the engine was turned off, the doors were closed and each of the four windows was opened only slightly.

The vehicle was parked in direct sunlight and the children, 2 years old and 6 months old, were alone, police said.

Police say Shanesha Taylor, 35, returned to the vehicle about 45 minutes after the passerby found the unattended boys.

Taylor told officers she had just finished a job interview and did not have anyone to take care of her children, according to the police report.

She was arrested and booked into jail on child abuse charges.

A Scottsdale woman, Amanda Bishop, started an online fundraising page to help Taylor. So far over $4,900 has been collected to help.

“There are a lot of us who feel she was just a victim to what an economy like this is putting struggling families through,” Bishop said.