The Ogun State police arrested Angela Chidozie, 39, last week Friday at a house she allegedly used as a ‘baby factory’ in Akute area of the state and eight pregnant women and teenage girls were rescued. 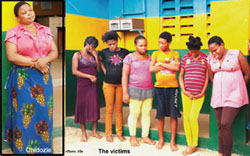 Angela who is currently being held at the Anti-Human Trafficking and Child Labour Unit of the command said money was not the aim of operating the business but rather it was aimed at helping the young girls and those in need of children and that is why she prays for the children before handing them over to the buyers.

She insisted that she was sure none of her patrons bought the babies for ritual purposes.

“I study those who come to buy babies from me. When I am sure that they actually want to buy because they are looking for the fruits of the womb, I sell the babies to them. It is my job now. I know how to test the women to see if they actually cannot have children. When I see people who come to me for children, I know if they want the babies for ritual purposes or not. I ensure the women come with their husbands.  I don’t sell children to them if they don’t come with their spouses.”

According to her, she didn’t force any of the girls into the business, they came of their own freewill, adding that she screened them before accepting them, rejecting any who did not answer her questions satisfactorily.

Angela said she gave the girls ante-natal care in the house where she kept them as she had a dedicated nurse who took care of them.

Police Public Relations Officer of the state command, Mr. Muyiwa Adejobi, said the AHTCLU had started getting in touch with the families of the girls who are currently in the custody of the Anti-Human Trafficking and Child Labour Unit.