Following the shocking discovery of the Ibadan house of horror where people were kidnapped and kept prisoners, decomposed bodies, skulls found. Families of surviving victims have stormed the hospital and are full of joy over reuniting of their loved ones. 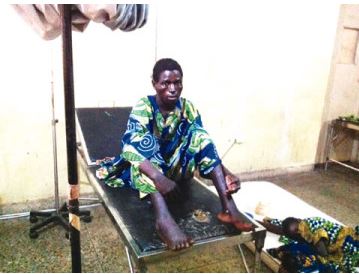 Eight victims who were saved by the police from the forest of horror are currently being treated at the Adeoyo State Hospital, Ibadan.

According to a relative of one of the victims, Wale Atoyebi said: “He was living with his paternal grandmother in Ada, Osun State, but his father, who died eight years ago, lived in Ibadan.

“His mother was no longer with his father when he went missing. I also lived in Ibadan and sell planks at the Abayomi, Exide area of Ibadan. When I saw his name in the newspapers, I called Ada to know if he had come home, but I got a negative response. That brought me to the hospital and immediately I saw him, I knew he is our son.”

Mr. Atoyebi who came to the hospital with his wife, said although he was happy to see Wale, he is worried about his health saying:

“He is not the Wale we knew. He was a boy that was full of life when he left home,but we are sad that he cannot relate with us normally.

“He has not be responding to greetings and gestures. Wale is not mad; he was born normal with deformed fingers which I used to ascertain his identity.”

Some other families who had lost their loved ones also came with the hope of seeing them in the hospital.

While some victims have recounted their horrible experience, others are still finding it difficult to adjust. Some of the hospital workers, however, said although some of the victims would eventually regain full recovery, there were some who needed psychological evaluation.

One of them said “The hospital management must decide on this fast so that we don’t just hold them here without the right treatment. Physically, they will be okay but we have to carry out various tests to know their mental state.”

Meanwhile, Oyo State Governor, Abiola Ajimobi who visited the scene ordered the bush be cleared and the Certificates of Occupancy (C of Os) of the forest revoked.

Bodies discovered at the forest of horror are being buried in mass graves by the officials of the Oyo State Government.