On the 22nd of March, the Police discovered an abandoned building in Soka, Oluyole LGA of Oyo State known to be the den of ritualists where victims were being kidnapped with some tortured to death and skeletons, skulls found scattered all over the place. 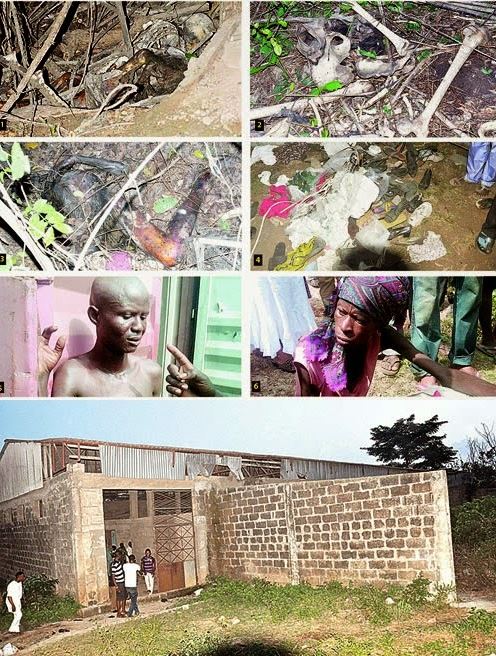 Photos from the house of horror discovered in Ibadan

The police were able to rescue about 23 victims as one of the victims who was however lucky to be alive following the traumatic experience narrated the horrible ordeal.

One of the victims who said she was kidnapped in September 2013 said:“I remember that I left my home in Okebola and was going to Challenge. I entered a taxi and that is the only thing I can remember until police rescued us on (Saturday).”

“I can recollect seeing people falling down, I can remember that some were taken away and they never returned, but really, it did not mean anything to me until Saturday. It was as if I woke up from a slumber.”

Meanwhile families whose loved ones had been missing stormed the abandoned building on Sunday with the hope of finding them. The Oguntade family who happens to be one of such families went in search of their 95-year-old father, Isaac Oguntade who had been missing since December 31, 2013 after leaving home in Osun state but never returned.

“He is an old man, but still strong. He was a retired teacher and he was going to a bank on Osogbo Road on the day we last saw him.

“We have searched everywhere in vain. When we heard of this discovery, we came down to see if our father could be one of the victims, but we could not find him here,” said Kehinde, the family spokesperson.

The Oyo State Police Command, however stated that they have arrested a man in connection to the crime saying:

“Some decayed corpses and skeletons were also found in a nearby bush. The scene was visited and one Abideen Akanmu was arrested. He said he was employed by one Gbadamosi, now at large, to take care of the destitute found there.