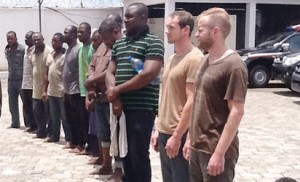 Two Britons and 12 Nigerian technicians allegedly involved in illegal bunkering along the Chanomi Creek in the western delta have been arrested by operatives of the Joint Task Force in the Niger Delta code named Operation Pulo Shield.

The suspects were said to have offered the operatives of the JTF the sum of $66,500, to create safe passage for them to siphon crude oil into their barges from a Shell Petroleum Development Company pipeline along the Chanomi creek in Delta State, an offer the operatives rejected.

The two Britons identified are Messrs Piers Eastwood and Vincent Haywood attached to a United Kingdom based maritime security firm with regional branch in Lagos.

According to the JTF, they were to provide security/consultancy to MT Crete, a vessel believed to have been positioned at Brass open waters for supposed illegal bunkering.

A representative of a firm (name withheld) had on March 17, approached the JTF Headquarters with an approval letter from the Nigerian Navy Ship Delta and an authorization from the Nigeria National Petroleum Corporation NNPC through the Naval Headquarters.

The approval was to evacuate products from an arrested vessel under the custody of the NN at NNS DELTA between 12 March -14 April 2014.

The Joint Task Force approval was reportedly issued and immediately, the headquarters directed Sector 1 of the special security outfit to monitor their activities in the waterways, Vanguard reports.

Speaking to newsmen yesterday at the headquarters of the JTF in Yenagoa where the suspects were paraded, the commander of the outfit, Major General Emmanuel Atewe who was represented by the Media Coordinator, JMCC Col Onyema Nwachukwu said they were arrested by operatives of the task force as part of ongoing effort to combat the menace of crude oil theft and other sundry crimes in the region.

“The Operations officer of 3 Battalion discovered through their confession that their intention was to hack into one of SPDC pipelines in Chanomi creek, Warri Delta State and siphon crude oil,” said Atewe.

“They gave him as an initial payment, a bribe of $5,000 for recharge card and $1500 to fuel a gunboat that will escort the stolen crude oil.”

According to him, they requested the Operations Officer of 3 Battalion to facilitate a meeting with the Commander 4 Brigade, Brig Gen Fidelis Azinta.

“The meeting was convened as a bait on March 20, 2014 at the Brigade Commander’s office. During the meeting, the suspects expressed their desire to connect a hose to SPDC pipeline along the Chanomi creek in Delta State so as to illegally siphon crude oil into barges.

“While in the Brigade Commander’s office, they promised to bribe the Brigade’s Commander, with the sum of N20m as well as take care of the officers and soldiers along the Chanomi creek.

“Twelve technicians who were to connect the hoses to facilitate the theft and their implements were also arrested.”

He added that a follow up operation subsequently led to the arrest of two Britons, who were in company of seven Nigeria policemen led by an inspector.

The two Britons, according to the JTF commander were security consultants from a United Kingdom- based port maritime security firm with regional branch in Lagos.

“The two flew into Lagos on 20 March and left for Port Harcourt same day where they met with a Nigerian (one Bello) who was supposed to be their point of contact. The two Britons were to provide security escort/consultancy to MT Crete, a vessel believed to have been positioned at Brass open waters for suspected illegal oil bunkering”.