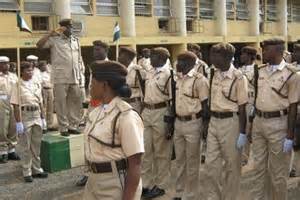 President Goodluck Jonathan, yesterday, directed that three job slots each be reserved for families of those who lost their lives during the Nigeria Immigration recruitment exercise.

Jonathan also directed the immediate cancellation of the recruitment exercise. Instead, a special committee headed by the Chairman of the Civil Service Commission, Mrs Joan Ayo, will conduct the employment test to fill existing vacancies in the Nigeria Immigration Service.

The presidential directive was given at yesterday’s Federal Executive Council meeting where the President further directed that those who lost their loved ones would have automatic slots for three applicants, one of whom must be a woman.

He also warned that henceforth, ministers and heads of government agencies where any death is recorded in the course of recruitment exercise would be tried for culpable homicide.

Minister of Information, Mr Labaran Maku, who addressed State House correspondents after yesterday’s FEC meeting said the President further directed that only the armed forces and the police are allowed mass recruitment exercises.

According to Maku, President Jonathan promised to personally pay condolence visits to the families of those who lost their loved ones while those who sustained injuries during the botched exercise were also to be given automatic employment.

“The President also took certain measures which he announced to Federal Executive Council. The first is that the Immigration recruitment exercise has been completely cancelled and he has directed that a new exercise will be conducted by a special committee under the chairmanship of the Chairman, Civil Service Commission to conduct the recruitment exercise to fill the vacancies of the Nigerian Immigration Service,” Maku said.

“This committee will proceed to conduct the exercise to fill the vacancies in the Nigerian Immigration Service.

“The President also directed that for the families of those who lost their dear ones, three spaces be provided for three young people one of which must be a woman in the new recruitment exercise.

“Also, all those who were injured during the exercise across the country will be given automatic recruitment into the service.

“He instructed all MDAs never to embark on exercises of this nature in recruiting people into the public service because what happened could have been avoided.

“So, Mr. President directed that outside the armed forces and the police, who usually recruit people through this exercise, no other MDA is allowed to embark on this kind of exercise that we witnessed on Saturday.”

The minister said members of the Federal Executive Council “noted with grief and deep regrets, the tragic loss of young Nigerians who died in different centres across the country in the ill-fated Nigerian Immigration Recruitment Exercise.

“The FEC in sending condolences to the families of the deceased and also in sending special wishes to those who are injured and still undergoing treatment in hospitals in parts of the country, expressed total regrets that this tragedy took place at all.

“Council noted that it is regrettable that this took place at a time that every effort was being made by government to increase spaces available for employment. For example last year, we were able to get 1.6 million employed in the various sectors of the economy and the public service. However, this incident that took place is so painful and we will not want to see in this country young job seekers losing their lives in the process of seeking for job after school training.

“We assure the nation today that every step will be taken to look into the various lapses in recruitment exercises into the public service to ensure that all those who are qualified get access to employment without going through this kind of experience” he said.