Home News Feed IMMIGRATION STAMPEDE: Educationists Voice Out Their Anger, READ What They Had To...
Facebook
Twitter
WhatsApp

Over 50 per cent of the Nigerian youth population is unemployed. A recent survey puts the figure at 54 per cent. 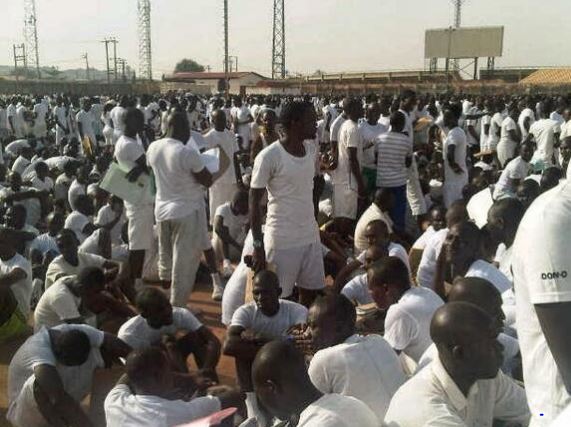 This figure was reduced by about 16 people over the weekend, not as a result of job provision, but by the  claws of death at the recent Nigerian Immigration Service recruitment exercise. Blame it on unemployment, experts say, and they could not be farther from the truth.

A Press release signed by the National President of Education Rights Campaign (ERC), Mr. Hassan Soweto, said that ERC was outraged at the avoidable wastage of the lives of scores of unemployed Nigerian youths during Nigeria Immigration Service recruitment test over the weekend. “The ERC believes it is the social responsibility of the government as the custodian of society’s commonwealth, to provide a decent job for every citizen.

“All talks about young graduates becoming employers of labour is nonsense especially in a society where public infrastructure like electricity, water and transportation needed to support self-employment, are lacking,” said Soweto.

Dr. Ifeduba Emmanuel, a lecturer at Redeemer’s University (RUN) frowned at the mishap by saying: “By now we should have passed that stage, as there was no adequate arrangement for the exam to be written in a decent way. The way the exam was conducted is primitive, it is a big shame.  The bigger picture here is that of unemployment, and I believe that the  Federal Government should be blamed for that.

“National Universities Commission (NUC) accredits courses and schools produce more people that the economy is not prepared to absorb. Government should emphasise on agriculture. The rate of unemployment in Nigeria is unacceptable in all ramifications. People in government are voted to provide solutions and not to create problems.”

Another educationist,  Mr. Adelabu Omowale said: “Government at all levels should put measures in place to reduce poverty drastically, provide social security for the unemployed youths instead of budgeting and giving money only to those holding public offices who already have money.

“Government should also diversify the economy, reduce importation when we can create means of producing them here. Imagine things like toothpick and matches being imported!”

In the light of the prevailing circumstances, Director-General of the National Youth Service Corps (NYSC), Brigadier-General Johnson Olawunmi has called for more practical solutions to youth unemployment situation in the country.

Addressing participants at a one day stakeholders’ meeting on the NYSC skills acquisition and entrepreneurship development programme in Lagos, Olawunmi stated that the task of refocusing of the scheme as a unifying factor in the country has become necessary in order to make it relevant to contemporary needs of Nigerian youths and address growing unemployment statistics.

In her presentation at the meeting, Director, Skills Acquisition and Entrepreneurship Development (SAED), Mrs. Mary Dan-Abia lamented that the era of employers giving letters of employment to graduates shortly after service year is now a thing of the past.

She said the SAED programme that commenced in March 2012 was a child of necessity to practically seek alternative employment options for the growing number of graduates turned out by local and international institutions.

She said part of the measures put in place by NYSC to tackle youth unemployment in the country is the SAED programme that started in form of partnership with the National Directorate of Employment (NDE), CBN and NYSC Foundation for corps members who are not gainfully employed to start a business of their own.

Speaking further, the Director explained that War Against Poverty was also one of the measures the scheme embraced to bring succour to corps members during and after national service.

Recording little or not so much as desired, she said the Bureau of Statistics’ report for 2011 that put youth unemployment at 23.9 per cent and another report that says 54 per cent of Nigerian youth are unemployed, set the scheme thinking for more practical approach.

Dan-Abia stated that the NYSC in line with the transformation agenda of the Federal Government set a target to empower 200,000 of the 250,000 corps members mobilised annually for gainful jobs they can do on their own as alternative to dwindling white-collar jobs.

To achieve this objective, she said NYSC embraced three broad-based options of capacity- building, broad-based partnership and collaboration with stakeholders and policy and advocacy.

Counting the gains of the programme in the last one and a half years, Dan-Abia said the scheme has effectively mobilised and trained 245,482 corps members comprising 129,812 males and 195,760 females in different skills.

She said of these, the scheme has produced 632 young business owners who are now employers and trainers of other categories of Nigerians in their chosen skills.

She identified funding, lack of a training centre for the scheme, lack of an incubation centre, lack of entrepreneurship development and support by stakeholders and challenge of fixed mindset of young graduates, as some of the problems facing the project.