Following the Immigration Service stampede that saw many feared dead and several injured over job employment on March 15, a couple who were among the victims injured have narrated their experience. 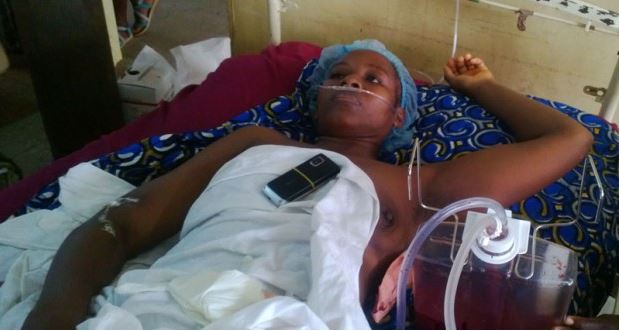 The couple, Mr. Timothy Omuagbon and his wife Grace who had their own aptitude test in Benin City are being treated  at the emergency ward of the University of Benin Teaching Hospital (UBTH) and they are crying out for help.

The wife, Grace, an Economics graduate of the Delta State University, Abraka who has a broken rib and scapula was yesterday put on oxygen also had a can attached to her to enable blood be drained from her broken rib.

While the husband, Timothy who studied Accountancy at the Federal Polytechnic, Auchi had bruises.

Grace who narrated her ordeal said :“As we were going in, people were struggling to get in, but the door was not wide enough. I fell and was revived. Immigration officials took us to the Central hospital. I could not talk and I was coughing out blood,” she said, adding:

“My husband took me to one private hospital from where I was referred here. I had broken ribs and a bone in my shoulder. We were many that Immigration officers took to the hospital. One person died.

“My husband paid the hospital bill. An iron has been fixed in my rib to enable the blood to flow. Doctors said my lungs collapsed. They should help us and give one of us a job. My husband finished from Auchi Polytechnic since 2006. I teach in a private school and earn a little salary.”

Timothy who has three children with his wife worked at a firm but left to become a taxi driver to make ends meet because the salary he was getting from his previous job was “little” and wasn’t being paid on time.

He also shared his experience: “I am 35 years old. At the stadium, the crowd was large. Only one gate was open for the thousands of people who came for the test. We were at the front. I held my wife so that we could be together. Both of us fell and many people fell on us. You can see the bruises all over my body.

“Immigration officers helped me out. My wife was still being trampled when I had to call for help. She was already gone but they poured water on her. Immigration people brought their van and took us to the hospital. They left us there. I saw my wife’s condition and I took her away.

“I have spent over N100,000. I was doing a private job and was being paid N30,000 but the salary was not regular. It was not helping my family, which made me to leave. I was working as a taxi driver before we heard of this recruitment. They should not allow us to die before giving us jobs. They should come to our aid. My wife is lying here at the hospital and there’s nobody to help,” he said.

However the Liason Officer of Save Accident Victims of Nigeria (SAVAN), Cynthia Ogbo, said the NIS had not responded to their call to assist the couple.

She said: “They have not come here to see the victims. We have sent messages to them but they have not come. It is unacceptable for this country to pay militants and thugs huge salaries but allow graduates to suffer and even exploit them by asking for N1000. This thing should not happen again.

“Three victims were taken to the hospital, but one left. One victim is in a really bad condition. She could not talk when she came in. Her situation was worse but the doctors are doing their best.”