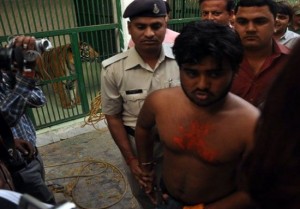 College students are known to do the stupidest things at times, but this one just takes the cake. Yashonandan Kaushik, a 23-year-old student of Engineering from Madhya Pradesh, India, actually jumped into a tiger’s enclosure at Gwalior Zoo. The bizarre incident that took place around 5pm on Monday stunned spectators and zoo staff alike. Kaushik completely ignored their cries to come out. He took off his shirt, challenged the tigers to a fight and tried to chase one of the beasts into its cave. Surprisingly, he made it out of the enclosure unharmed.

Someone caught the whole thing on video – the clip shows Kaushik trying to provoke Luv and Kush, the two tigers in the enclosure. But the tigers just look plain scared and run in the opposite direction. Kaushik continues to dance and behave irrationally (for about 45 minutes, according to news reports). When one of the tigers runs into its cave, he follows it and appears to call for it to come out and fight. At one point he can even be seen sitting in a yoga posture while the tigers stand merely feet away. Lucky for him, security staff arrived and locked the tigers away, before escorting Kaushik to safety.

One eye-witness said: “This was something which I will never come across in my life again when I saw this virtually lunatic individual making futile bid to invite the big cats for a duel.” According to the zoo officials, wild animals born and bred in captivity rarely get aggressive or attack people. They lose their natural instinct to fight, and inbreeding also results in weaker cats.

A further probe into the incident revealed that it took Kaushik ten minutes to climb the wall and drop into the enclosure. During this time, none of the staff members present at the site prevented him from doing so. The rescue operation took one whole hour to complete – it isn’t clear what caused the delay. This does reflect on the lackadaisical attitude of employees at many Indian zoos.

Some reports suggest that Kaushik may have been drunk. Others say that he might be mentally unstable. Just as the police were going to charge him with suicide – a serious crime in India – his father Ashok Kaushik got him out with promises of medical care and psychiatric counselling. Officer Narayan Singh of Inderganj Police Station said: “The boy has been missing from home for about five days. He is mentally unstable and needs medical assistance. His parents will now take charge of him.”