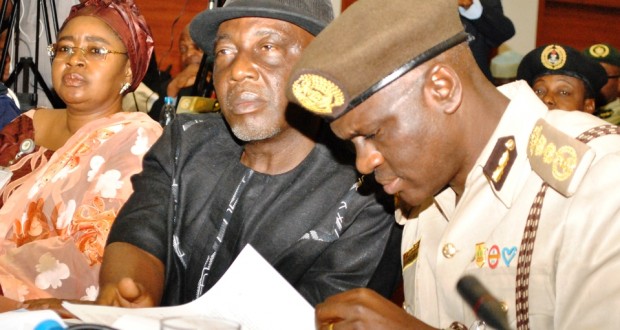 Embattled Minister of the Interior, Comrade Abba Moro, on Thursday, finally took full responsibility for the ill-fated recruitment exercise into the Nigeria Immigration Service, NIS, held on Saturday, March 15, nationwide, which led to the death of 16 job-seekers across various centres.

It would be recalled that in his initial reaction to the tragedy, Moro had blamed the applicants for being impatient and not adhering to instructions

But appearing yesterday before the Senator Atiku Bagudu-led Senate Committee on Interior, which is conducting a two-day public hearing into the unfortunate incident, Moro said adequate arrangement was put in place by his ministry, the board and the NIS to conduct a credible electronic recruitment into the NIS in order to save the agency from the negative image of job racketeering which had plagued it over the years..

He told the senators that just like every concerned Nigerian, he was deeply grieved and saddened about the turn of events.

Moro said, “Mr Chairman and Distinguished Senators, we are deeply grieved and saddened about the way events turned out. We express our sincere regrets once again.

“However, permit me to state that our patriotic desire was the pursuit of a more honest, a more transparent, a more cost effective, a more efficient and equitable platform.

“We sincerely made appropriate and adequate preparations for a hitch-free exercise, but as most things in administrative and human conditions, the yield curve of expected outcome is mostly undefined.

“My heart goes out to the families of those who have lost their dear loved ones. I sincerely sympathise with those injured. I share in their grief. I share in their pains. May I at this juncture, assure you Distinguished Senators and Nigerians of my respect for the sanctity of human life.

“The loss of these young Nigerians, who are needed as a critical human resource factor for nation building is most regrettable. As the minister of interior, under whose purview this unfortunate exercise took place, I cannot abdicate my responsibility. The buck stops at my table”.

Dismissing insinuations that his ministry ripped unemployed Nigerians of their money by collecting an application fee of N1, 000 per applicant, Moro explained that neither the interior ministry, the Board of Civil Defence, Fire, Immigration and Prisons Services, nor the NIS was involved in the collection and custody of the application fees, which was paid by a total of 710,110 job seekers.

Meanwhile, only 522,652 were short listed for the ill-fated aptitude test and physical examination.

“This decision was taken, mindful of the fact it was not a business or profit making venture for the Ministry but an exercise to ensure efficiency and transparency in the conduct of recruitment into the services. This e-recruitment platform has also been in use by other services, the Nigerian Navy, Nigerian Army, Nigerian Airforce, Federal Road Safety Commission and the National drug Law enforcement Agency”, he added.

A permanent member of the board, Mr. Mustapha Zakariya, and the Comptroller General of Immigrations, Mr. David Parradang, told the committee that the recruitment exercise conducted was not approved by the board.

Zakariya, who said he had been a member of the board since 2008, also told the committee that the decision to hire the consultant that conducted the exercise was unilaterally taken by Moro, who is also the chairman of the board.