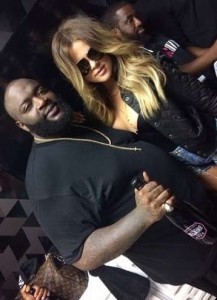 See below how they reported it: –

According to a person close to Khloe, the eldest Kardashian is head over heels for Rick Ross. The insider explained, “Diddy introduced Khloe to Rick Ross, and they immediately hit it off.”

The couple has been trying to keep their romance under wraps, but after last night – it looks like they’re ready to go public

Khloe was Rick Ross special guest at his Revolt concert yesterday. And they even tweeted out a pic together.