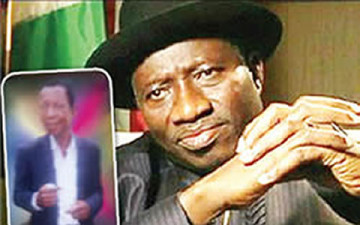 Vowing to work with security agencies to secure the release of the septuagenarian from the kidnappers den, IYC condemned the act and promised to help unmask those behind the abduction.

IYC spokesman, Eric Omare, said in a statement that the foremost Ijaw Youth group had already set up a three-man panel to liaise with the security agencies to rescue the old man.

“The Ijaw Youth Council, worldwide condemns in the strongest term, the kidnap of the 70-year-old”, he said.

Describing the incident as unfortunate, the group said it was coming at a time when Mr. Jonathan needed to be fully focused on the task of governing Nigeria.

He expressed sympathy to the Jonathan/Nitabai family of Otuoke, saying that IYC would work with security agencies to fish out the perpetrators.

Maintaining that there is no hiding place for kidnappers and criminals in Ijaw land, IYC reiterated that kidnapping and criminality is alien to Ijaw culture.

The group said it believes that no crime can be committed without the connivance of people within the immediate environment.

Omare added that this formed the basis why the group had resolved to confront kidnapping and all forms of crimes in Ijawland.

The group also called on the Bayelsa State Government to ensure that the kidnappers of the president’s uncle are brought to book and its anti-kidnapping law tested.

The statement noted that kidnapping and criminality cannot stop without bringing to justice those involved in the act.

Mr. Nitabai spent his seventh day in the kidnappers den yesterday with the security agencies yet to locate his whereabouts.

He was seized from his Otuoke home, in Ogbia Local Government Area of the state last Sunday by 10 gunmen, who have since established contact with his family, demanding N500million as ransom. The kidnappers also threatened to kill him if the police or other security agencies are involved.

Following the rising cases of kidnapping in the state, the House of Assembly passed a bill which prescribed the death penalty for convicts.

Governor Seriake Dickson signed the bill into law but no one has yet been tried under it.

Mr. Nitabai’s abduction presents the best opportunity for the government to put the law to test.

This much was buttressed by Omare, who asked Governor Dickson to ensure that the abductors are apprehended and brought to book, saying that unless people involved in kidnapping are dealt with, the illegal booming trade would thrive.

It also described the abduction as a distraction to President Jonathan.

“Coming at a time when President Jonathan needs to be in the best frame of mind to face the challenges of governing a complex nation such as Nigeria is most unfortunate”, it said and announced the setting up of a three-man team to work with security agencies to find Nitabai.

“There is no hiding place for kidnappers and criminals in Ijawland. Kidnapping and criminality is alien to Ijaw culture”, it declared.

“The IYC believes that no crime can be committed without the involvement of people within the immediate environment. Hence, the resolve to confront kidnapping and all forms of crimes in Ijaw land”.