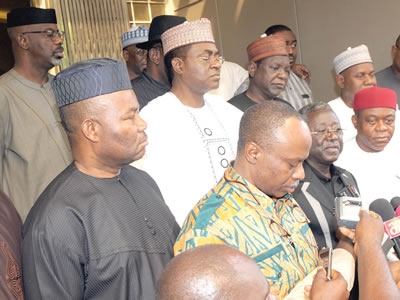 The Jonah Jang faction of the Nigeria Governors Forum, NGF, has condemned the killings in Katsina, Kaduna, Benue and some North-Eastern states.

The governors, who had a closed door meeting that lasted from Wednesday night to the wee hours of Thursday in Abuja, also called on Nigerians to give the ongoing national conference the support and encouragement it needs to succeed.

In a communique read by Governor Olusegun Mimiko of Ondo State, the forum sympathised with the governors and peoples of the affected states where he said insurgents have carried out their atrocities.

The communique read in part: “The forum deliberated on the security situation in the country that strongly condemned the killings in Benue, Katsina, Kaduna and some of the North-East states and sympathise with the governors and people of these states.

“The forum commend Mr. President for convening the National Conference and called on all Nigerians to give it the needed support and encouragement.

“The forum welcome his excellency, Dr. Willy Obiano, the newly elected governor of Anambra state to the forum. The forum also congratulate the Chairman, the Governor of Plateau state, his Excellency, Dr. Jonah Jang on his 70th birthday, we wish him many more years ahead”.

In their different interviews with reporters after the meeting, the Governor of Akwa Ibom Statate, Godswill Akpabio and his Benue State counterpart, Gabriel Suswam, decried the security situation in the country and Benue in particular.

Akpabio said, “All state agencies must rise to the occasion and the governors on their parts must redouble their efforts in terms of intelligence gathering and also in terms of policing. We must do everything possible to assist the security agencies to succeed in our various states”.

On his own part, Suswam said, “the security situation in my state has deteriorated, it is unfortunate, but I have fully briefed the President, I briefed the security agencies as well. Some serious measures will be taken very soon.

“Even this evening before I came for this meeting, I went to the Chief of Army Staff to brief him. I gave him details of the intelligence that we gathered of people who are carrying out this dastardly act.

“We received strong promise that some serious decisive actions will be taken to address the security situation in Benue”.

Speaking on the confab, Suswam said, “My opinion is that I supported it in the first place and I would expect that the delegates who are there now should put the interest of the nation first and foremost and try to deliberate on issues that will impact positively on Nigeria people and not to go and engage in unnecessary argument.

“I am in support of the confab and also will urge and appeal to the delegates to put national interest first and foremost above other interest”.

The meeting was attended by the governors of Taraba (Acting Governor), Ebonyi, Kogi, Enugu, Ondo, Plateau, Bauchi, Cross River, Akwa Ibom, Benue and Anambra. While Sokoto and Abia State governors were represented by their deputies respectively.