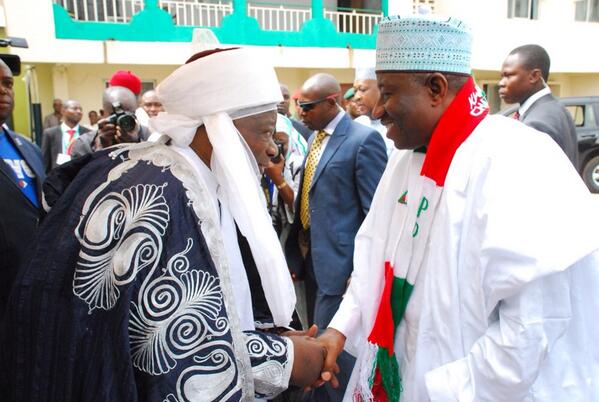 President GoodLuck Jonathan on Monday commended the foresight of the Emir of IIorin, Alhaji Ibrahim Sulu-Gambari, for ensuring peaceful co-existence among the people of the state.

Jonathan made this observation when he called on the Emir at his palace in IIorin.

The President, accompanied by his vice, Alhaji Namadi Sambo, some ministers and governors, expressed happiness at the harmony and unity that Kwara was known for.

He thanked the Royal Father for working with other government agencies towards ensuring sustenance of peace in the state.

Jonathan urged the Emir not to relent on maintaining the already existing peace in order to ensure sustained peace in the state.

The President told the Emir that he was in the state to ginger up members of the Peoples Democratic Party for the forthcoming general election.

Earlier, the Emir, Alhaji Ibrahim Sulu-gambari, had told the President that peace, unity and love would continue to reign supreme in the state.

The monarch, who described Kwara as gateway to North and South of Nigeria, assured the President that efforts would be made to ensure continuous peace in the state.

The Chief Imam of IIorin, Alhaji Mohammed Bashir, offered special prayer for peace, unity, love and understanding in the state and the country. (NAN)