Nairobi pastor Reverend Njohi has introduced a form of worship at his Lord’s Propeller Redemption Church in which female members of the congregation are banned from wearing underwear so God can enter their bodies easily. 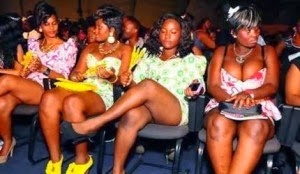 After a recent meeting of the church’s elders, to debate the matter Reverend Njohi passed an edict banning the wearing bras and panties when attending service.
Defending the law, Reverend Njohi claims that when going to church, people need to be free in body  and spirit to receive Christ.
Describing the wearing of underwear to church by women as ungodly, Reverend Njohi warned his members of dire consequences if they secretly did so.
According to one of the church’s members, last Sunday, all the female members of the congregation came to the service without any panties or bra as the pastor ordered.
Mothers were advised to check their daughters when coming to church on Sundays so as to ensure their obey the edict and can receive Christ too.
Reverend Njohi’s church is located in Dandora Phase Two, an eastern suburb of Nairobi, which was listed by the Blacksmith Institute as one of the most polluted sites in the world.
Following the passing of the edict local Dandora residents frog marched one of the senior pastors to the church where they ordered him to open its doors.
They stole money and the pastor’s mobile phone and the walls and windows of the church were badly vandalized.
Dandora was established in 1977, with partial financing by the World Bank in order to provide decent housing to Kenyans but the estate has turned into a high-density slum with massive unemployment.
Nairobi’s main sewage treatment works and discharges processed water into Nairobi River in the area.
Recently, however, several Kenyan hip hop groups have emerged from Dandora and the artists are determined to use music as a positive community force.
Recently a visit by American group Dead Prez has increased attention to the impoverished and woeful living conditions in Dandora.
————————–
And yet still they follow these so called pastors blindly. Amazing. Beats the imagination to even try to understand why they will even obey such a command.