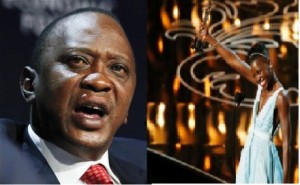 ‘I join Millions of Kenyan and worldwide fans to congratulate and support Lupita Nyong’o as she confronts one of the biggest nights in her career so far. Lupita’s accomplishment testifies not only to her stupendous talent, but also determination and a willingness to go that extra mile which success unfailingly demands. She has told one of the most haunting stories from a time when the black person was a mere chattel, to be disposed of at the will of an improvident white owner in transactions then recognised in law as legitimate’, Kenyatta wrote in a tribute to Nyong’O whp has become the first African to win an Oscar

‘I am inestimably proud that Lupita, a young Kenyan, had the opportunity to make her contribution to Black Awareness, and just to tell an excellent human story magnificently. Her role is indelible, and her gift indubitable. We are grateful that we got to see Lupita, one of our very own, shine so impeccably, and own the global stage so imperiously. Like other fans, I hope that Lupita wins the recognition that she so richly deserves for her scintillating role. I also believe that the fact that Lupita is where she is today -on the cusp of a truly unique accomplishment – is already a massively gratifying milestone.

‘The youth in Kenya are inspired by Lupita. We hope that her trailblazing exploits continue in order to demonstrate that no barrier to human endeavor is insurmountable. It is our intention that Lupita becomes the first of an endless line of Oscar nominees and winners from Africa and Kenya.

I therefore wish Lupita and her proud family all the best tonight. May this be the beginning of many splendid achievements.’

Kenyatta also revealed that there are ongoing projects which will be an avenue for many young Kenyans to discover their talents.

‘My Government has made the promotion of Arts and Talent a key pledge that must be delivered. We have made progress in that regard, and many young Kenyans will have access to funding for artistic projects, including film and drama,’ he added.

Lupita Nyong’o was named the Best Supporting Actress of the year at the 86th Academy awards for her role in ’12 years a slave’.