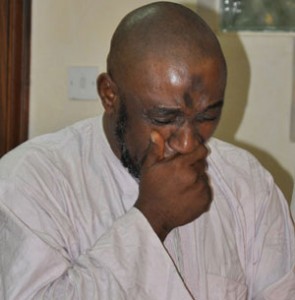 The Department of State Service, DSS, yesterday, declared that Dr. Mohammed Nazeef Yunus, a lecturer at the Kogi State University, accused of being the spiritual leader of a Boko Haram cell situated at Igala land in Kogi State, propagated terrorism across the federation by the teaching of virtues of Jihad (Holy war).

The accused lecturer who had been in the custody of the Directorate of State Service, DSS, since October 30, 2013, was on February 3, transferred to Kuje Prison, Abuja, on the order of the trial high court.

A Federal High Court sitting in Abuja had in a ruling yesterday denied Yunus and two others bail. Alhaji Salami Abdullahi and Umar Musa, were the other two accused of belonging to the Boko Haram sect.

Justice Gabriel Kolawole said it would not be in the interest of justice to release the accused persons at this stage of their trial, stressing that in view of the prevailing atrocious acts of the Boko Haram sect in the North Eastern part of the country, it was safer to deny them bail.

Citing the wanton and mindless killing of innocent people, especially the recent massacre of students of the Federal Government College Buni Yadi by members of the Boko Haram, Justice Kolawole, said he was minded to exercise his discretionary powers to grant bail against the accused persons.

He maintained that the court, in exercising its discretion, must do so judicially and judiciously, “The bail applications are hereby refused,” the Judge held, even as he okayed accelerated hearing of the charge against them.

The court also dismissed plea by the 2nd accused, Salami, to be released on health grounds.

Government had alleged in an eight count charge before the court that the trio, within the months of May and October, 2013, at Ayangba in Kogi state, engaged in an act in furtherance of acts of terrorism by not only acquiring weapons, but also recruiting new members for the Boko Haram Islamic sect.

According to the charge, some of the weapons recovered from the accused persons included 2 AK-47 Rifles, 2 Magazines and 60 rounds of live ammunition.

By belonging and supporting the illegal activities of a proscribed organization, the government, said the action of the accused persons ran contrary to sections 4, 10, 12, 16(1) (4), 17 and 18 of the Terrorism Prevention Act, 2013, as amended.

The accused persons had since pleaded not guilty to the charge.

The Federal Government earlier disclosed its intention to call about six former students of the accused lecturer to appear as witnesses before the court with a view to establishing his complicity in the propagation of terrorism across the federation.

The prosecuting counsel, Mrs N.B Jones Nebo, told the court yesterday that there was a prima facie evidence to prove that Dr. Yunus, supervised the burial of weapons in the ground. “My Lord, we have also by way of evidence shown what the weapons were meant for. We have identified the ones we have discovered so far, which from all indications, were the case of keep this, we are getting more”, she added.

The DSS had maintained that the 44-year-old lecturer and a graduate of Islamic University of Medina, Saudi Arabia, confessed that he had over 80 adherents, and hitherto conducted preaching sessions every last Saturday and Sunday of the month at Ethosho Secondary School Ojiolo, Dekina, Kogi.

He was said to have confessed that his adherents were specifically taught the virtues of Jihad (Holy war) and the sanctity of the Sharia system as an alternative form of governance.