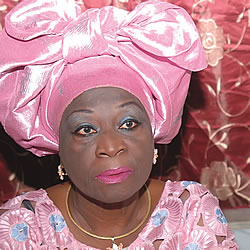 The Lagos State government yesterday described as false the allegation by a former Deputy Governor, Mrs. Kofoworola Bucknor-Akerele that her entitlements were still being withheld by the state government, insisting “she has been fully paid”.

Bucknor-Akerele, who was former Governor Bola Ahmed Tinubu’s deputy from 1999-2002, had last month ending alleged that the state government had never paid her entitlement since her resignation from office.

According to him, “All the pension entitlements due to Mrs. Kofoworola Bucknor-Akerele have been fully paid and are being met as and when due on a monthly basis.

“One Toyota Prado Jeep and one Pickup truck were recently delivered to the former Deputy Governor as part of her entitlement”.

He, however, disclosed that the grey areas left to be resolved was the former Deputy Governor’s insistence on the monetization of services rendered by personal staff employed by her, among other demands.

“The Deputy Governor’s demand for another set of vehicles as backup and replacement of all the vehicles every three years, notwithstanding the current means of Government, was unacceptable”, Ibirogba said.