Lupita Nyong’o has pretty rapidly become a new fashion icon and we think that you were interested in her lip balm shown at the Oscar 2014, just as we were. 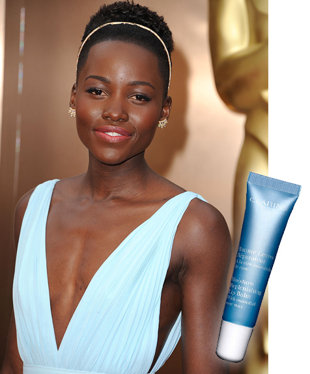 As the Oscar night starts, everyone becomes obsessed to find out the designers responsible for fabulous gowns, makeup artists and hair stylists responsible for beauty. No wonder why everyone has become so excited seeing such a personal beauty product as a lip balm. Right now more and more A-list celebrities are becoming beauty-ambassadors for various makeup lines, and it becomes even much more interesting to find out which products do they carry in their personal makeup bags all the time.

The buzz began when Oscar host Ellen DeGeneres  was collecting money from celebrities to pay for a pizza she had been serving them before. As some of the stars like Brad Pitt and Kevin Spacey put some cash into the hat Ellen was holding, Lupita put in her lip balm as she had no cash with her at the moment. Ellen reacted “Lupita’s lip balm! That’s worth something!”.

As soon as it happened, a trend on Twitter #lupitaslipbalm became viral and when someone recognized the brand and the product – Clarins HydraQuench Moisture Replenishing Lip Balm, the hunt began. Indeed, just up to the Monday morning the balm was practically sold out all over the States. While according to the spokes people of Clarins, the supply has been restores, we think it will not last for long.

Do you know some of the favorite brands or products of Nigerian stars?