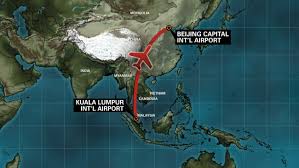 Najib said on Saturday that investigators believed “with a high degree of certainty” that Malaysia Airlines flight 370’s communications systems were manually switched off, and that the plane veered westward in a fashion “consistent with deliberate action” after dropping off primary radar.

But he told a highly-anticipated press conference watched around the world that he could not confirm rising suspicions that the plane had been forcibly taken over.

“Despite media reports that the plane was hijacked, I wish to be very clear: we are still investigating all possibilities as to what caused MH370 to deviate from its original flight path,” he said.

The investigation data appeared to cast aside a host of theories attempting to explain the plane’s disappearance, which has transfixed the world and left the families of the 239 passengers and crew distraught, enraged and baying for information that authorities have not been able to provide.

These include the notion of a sudden mid-air explosion or a catastrophic equipment or structural failure, or a crash into the South China Sea.

At the same time, it opened a whole new avenue of possible speculation, including an attempted 9/11-style attack, enhancing the twist-and-turn mystery surrounding one of the biggest enigmas in modern aviation history.

Final satellite communication with the Boeing 777 flying from Kuala Lumpur to Beijing came more than six-and-a-half hours after it vanished from civilian radar at 1.30am on March 8, Najib said.

He said investigators had concluded the plane was indeed diverted to the west from its original flight path, and as a result search operations in the South China Sea were being called off.

But the remaining area remained dauntingly large. Najib said the plane could be anywhere from “Kazakhstan and Turkmenistan to northern Thailand, or a southern corridor stretching approximately from Indonesia to the southern Indian Ocean”.

Earlier, a senior Malaysian military official said investigators now believe the plane was commandeered by a “skilled, competent and current pilot,” but stopped short of specifying whether a hijacker or member of the crew was suspected.

As the search for the plane continues, the focus in the gripping saga will shift to who would have diverted the plane and why.

Malaysian security officials were already embarrassed by revelations earlier in the week that two Iranian men had managed to board the plane using stolen European passports.

An Australian television report broadcast an interview with a young South African woman who alleged Fariq and another pilot colleague invited them into the cockpit of a flight he co-piloted in 2011 – a breach of post-9/11 security rules.

The Boeing 777 vanished over waters between Malaysia and southern Vietnam. The night was clear and no distress signal was received.

Even with attention now firmly on the Indian Ocean, the search parameters pose enormous logistical challenges.

The vast Indian Ocean has an average depth of nearly 3,900 metres and any debris would have been widely dispersed by currents after a week.

“Wind and sea conditions are definitely going to play a very big part if there is wreckage, and if it happens to be in the Indian Ocean. It is an immense area,” said Greg Waldron, Asia managing editor for aviation industry magazine FlightGlobal.

The plane has one of the best safety records of any jet, and the airline also has a solid record.