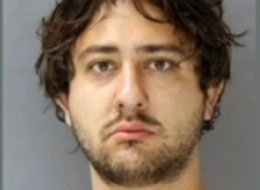 A Pennsylvania man’s alleged and ill-conceived attempt to keep his teenage sister off drugs has backfired in multiple ways. The brother is behind bars and his 14-year-old sister was high in school, according to reports.

Matthew Robbins, 32, was arrested Friday on child endangerment charges for allegedly giving his kid sibling heroin so she’d learn the dangers of the drug and avoid it later on.

Authorities started investigating Robbins in late January when police were called to a high school in Edgemont Township, to deal with two girls, ages 14 and 16, who staff members said were intoxicated, according to NBC Philadelphia.

The two girls allegedly told a staff member that they took heroin given to them by the suspect. A search of the girls’ belongings found no controlled substances.

The girls were taken to a local hospital for evaluation which is where State Trooper Peter Strzelecki spoke with Robbins’ sister and his mother.

The teenager said that Robbins had given her heroin on four occasions and other controlled substances on 11 occasions, according to MainlineMediaNews.com.

Robbins’ sister also told Strzelecki she and her friend had snorted the drugs in the school bathroom and flushed the packaging down the toilet.

Robbins’ mother handed the trooper a bag she said had been found in the suspect’s bedroom. It contained smaller baggies and a brown substance that later tested positive for heroin.

When investigators questioned Robbins, he allegedly acknowledged being an addict and said he wanted his sister to try heroin, so that “she knew how bad it was and that she would hopefully stay away from it,” according to the Delco Times.

Robbins has been charged with endangering the welfare of a child, corruption of minors, and recklessly endangering another person.

He is in Delaware County Prison awaiting a preliminary hearing next week.