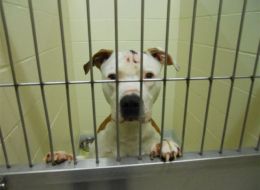 A Washington state man who tried to kill his dog with a sledgehammer after he hit it for eating doughnuts and it bit him has been sentenced to 14 days in jail.

Chad Scott Miller, of Longview, was sentenced Tuesday. He told a Cowlitz County Superior Court judge he felt he had run out of options with his pit bull named Nero after it bit him in October 2012 when he struck the dog for eating a box of doughnuts.

The 40-year-old Miller says he was afraid the pit bull would bite his grandmother or children in the neighborhood. So he decided to euthanize the dog by beating it with a sledgehammer.

The Daily News reports Nero escaped with a fractured skull and recovered in the care of the Humane Society.