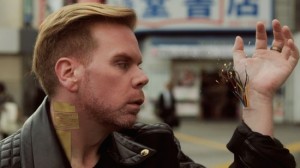 They say meditation can make you self-aware, but it looks like technology can do the job too! 45-year-old American software developer Chris Dancy, the world’s most connected human being, uses a range of sensors, devices, services and apps that gather real-time data about his activities and the environment around him. A total of 700 systems monitor his every mood and move, and being ‘the most quantified human’ has helped him know himself better than ever before. “I spent the last four years connecting all the devices that I wear to all the smart technology in my home, and piping all that data through to a single online platform, so I can search my entire life. I call it my ‘inner-net’,” he said.

Dancy doesn’t just stay connected for fun, he puts all the data to good use. By constantly monitoring his movements and eating habits, he has managed to lose 100 pounds. “I now know what to drink, what to eat, when to sleep and when to actually make myself get up. Very simple things like that,” he said. “It’s body and mind hacking. Just like we hack computers and any type of data, your body and your mind is the greatest information system humanity has ever known and understanding it makes it hackable.”

“When I touch something, I try to make sure it’s a something that I can get information out of so I can track, then search it, visualize it and share it with people who might want that piece of it,” Dancy added. He got the idea to stay connected after realizing that he was putting a lot of information online and if one of these services went out of business, relevant information would be lost. “It really started with me having a desire to digitally collect what I was creating.”

Dancy carries two smartphones (an iPhone 5s and a Moto X) and a plethora of wearable technology on his person at all times. A Pebble smartwatch on one wrist sends him updates from his phones. On the other wrist, he wears a Fitbit Flex that continuously tracks his movements and sleep patterns. He also has a Blue HR heart rate monitor strapped to his chest, a BodyMedia fitness tracker around his upper arm and a Lumoback posture sensor that vibrates when he slouches, beneath his waistband. He sometimes throws on a Google glass and has numerous sensors for products in his home, like a smartphone-controlled Hue lighting system and a Beddit mattress cover that also collects sleep data.

He uses Netatmo to monitor sound, air quality and temperature and Wemo for emotion sensors. A Nest thermostat regulates the temperature in his house and a Nest Protect checks for carbon monoxide and smoke. An app called Estimotes gives him information when he is near something in his home (so he won’t ever be losing his keys, I suppose). His security system and in-car statistics are all hooked up as well. Dancy hasn’t spared his two dogs either– he tracks their daily progress by collecting data via Tagg, a pet GPS system.

“The house knows my behaviors,” he said. “If I get really stressed out and don’t sleep well, when I wake up the light is a certain color, the room a particular temperature, and certain music plays. My entire life is preconditioned based on all this information that I collect in real time.” Dancy said that this ‘data-assisted living’ has revolutionized his life. He’s actually surprised that many people aren’t following his example. “I have had a lot of people tell me they want to do it or they are working on it but it has been two-and-a-half years since people started learning about me and no one has really done it. I don’t know what the holdup is as to me it is very easy to do,” he said. “Either they don’t understand the value of the information or it is just something hard for them to break.”

But it’s understandable why people aren’t so enthusiastic about it – strapping on so much stuff and looking silly. “All this stuff has to go away,” said Dancy. “It all needs to be in my clothing. Why can’t your shoes have haptic sensors in them, so if you’re walking you don’t need GPS – your shoe just vibrates left or right.” Also, there’s a very real threat of personal data falling into the wrong hands. But Dancy is optimistic about mastering our data, as long as we don’t give it away.

Because of his unique lifestyle, Dancy is a coveted individual to major tech companies and tech start-ups. They all want to study him and get his inputs on developing smarter products. “I have everybody from people who wanted to make smart cups to people who want to make underwear to major beverage companies and sportswear companies. I don’t want to name drop but almost every big company and a lot of start-ups have reached out to me. I give them advice and I will spend time creating what I think are good solutions for them.”

Dancy does believe that the future lies in staying connected. “It’s not about a refrigerator that knows you’re out of butter,” he said. “It’s about a lighting system that says ‘take an umbrella, it’s going to rain in an hour,’ just by flashing blue near your front door. No one needs something to read their texts or talk to you, they just need subtle reminders.” He also added that wearables would be confined to the health market for the next couple of years.

It’s interesting that while the rest of us are hooked on to the internet, Dancy pronounces it dead. Instead, he believes that the ‘innernet – the information of you – is the future’.