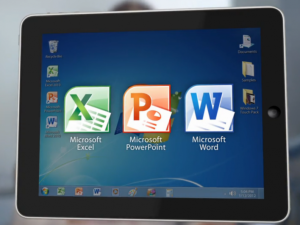 Microsoft has released an iPad version of its popular Office software suite.
This breakthrough heralds a new era under new CEO Satya Nadella who promises to focus more on the devices that people are using instead of trying to protect the company’s lucrative Windows franchise.

Thursday’s unveiling of the much-anticipated iPad apps for Microsoft’s bundle of word processing, spreadsheet and presentation software comes nearly four years after Apple Inc. released the tablet computer that has contributed to a steady decline in sales of desktop and laptop machines running on the Windows operating system.

The Office app is free to anyone who wants to read Office’s Word, Excel and PowerPoint documents on the iPad, but it will require a subscription to Microsoft’s Office 365 to create and edit on the device. The Office 365 subscription costs A$119 annually, but comes with a limited number of devices the software can be used on.

The Office 365 subscriptions also have been required to use Office apps built for the iPhone and Android phones last summer, so many iPad owners many already have one.
But millions of other people with iPads probably haven’t had a reason to buy an Office 365 until Thursday.

Nadella, who has been working at Microsoft for 22 years, emphasised that he felt rejuvenated since taking over as CEO.

“You see things from a fresh set of eyes and fresh perspective,” Nadella told a crowd of reporters gathered in San Francisco for his first major public appearance as CEO.
Microsoft hasn’t made Office apps for Android tablets yet, though the company has previously said those will be coming. Last year, Office apps for Android phones came out a month after the iPhone versions debuted.

“We are taking great focus and great care that Office on every device shines through,” Nadella said.

He promised to show off more pieces of his “innovation agenda” for Windows next week at a software developers conference in San Francisco.