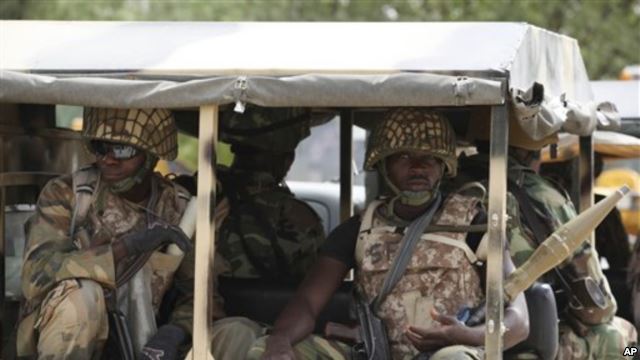 The Defence Headquarters said on Thursday that the current military offensive against Boko Haram insurgents in the North-East had yielded successes.

Major General Chris Olukolade, Director, Defence Information, stated this in an interview with the News Agency of Nigeria in Maiduguri.

He was speaking when he accompanied the Chief of Army Staff, Lt-Gen. Kenneth Minimah, and the Chief of Air Staff, Air Vice-Marshal Adesola Amosu, on a routine visit to Maiduguri.

“The military is operating in the Sambisa forest, in hills and other forests around.

“The idea is to make sure that the insurgents do not have a camp where they can organise their crime like before.

“Unlike some months back, the insurgents are now on the run,’’ he said.

Olukolade said that the attempted attack on Giwa Barracks, Maiduguri, by the insurgents was a sign of weakness.

“You will observe that they have stopped soft spot attacks for some time now.

“Most of the attacks now are daring, like the attempted barrack attacks, because they know that there time was up,’’ he said.

Olukolade said that the visit was to assess the troops’ operations in the campaign against insurgency.

“The visit is to assess the operation of troops on the ground. They have always visited to see things on ground,” he said.

On a date to end insurgency, Olukolade said: “We cannot set a target on ending terrorism in Nigeria, because terrorism has a unique character.’’

“Terrorism is like armed robbery, prostitution and other crimes, which have been on for a long time.

“These cannot be wiped out completely in the society, but you can bring them down to the lowest level where they cannot affect social and economic life.

“Our aim is to reduce terrorism to the lowest level where it will not be able to disrupt social and economic lives of the people.’’

Olukolade also faulted claims that some military commanders had failed to act on urgent information due to non-approval by their high command.

“It is not true that commanders will have to wait for permission before acting on urgent information on terrorist attacks or movements.

“Certainly, our operation does not require seeking permission from outside.

“Officers have some latitude to operate in such kind of situation.

“Each officer has been briefed on the rules of engagement in any operation; it is left for him to act immediately he receives information on terrorist attack or movement.

“If we receive complaint on officers refusing to act on urgent information, such officers will be reprimanded,” Olukolade said.