A one-month-old baby, who disappeared from Obosi, Anambra State, orphanage last November, has been found in a bush Ozubulu, Ekwusigo Local Government Area of the state. 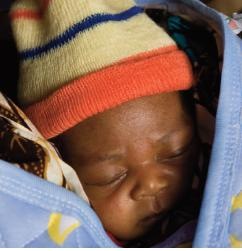 The little Chimdalu Nwite was reportedly crying in a sack, when by chance discovered by an okada rider.

According to Emeka Ejide, director of the State Ministry of Women Affairs, as soon as they were alerted, they ministry representatives rushed to the site to find out that it was the baby stolen from Christian Compassionate Motherless Babies home in Obosi in November.

Daily Post reports that Chimdalu had been brought to the orphanage by his father, Sunday, who claimed that his wife was mentally unfit and incapable of taking care of the child.

Several weeks later a lady, the so-called caregiver, came to the home to take care of children, and later begged to pass the night. However, in the morning was gone, so as the baby.

Chimdalu’s parents had accused orphanage administration of selling their child, while the latter claimed that Nwite masterminded the stealing for further compensation.

Still, the controversies continue, as both parties are still pointing accusing fingers at each other, accusing themselves of complicity in the discovery of the child.

The baby’s father, who confesses feeling relieved after Chimdalu’s discovery, swears never to visit any orphanage in his life.