Razak said this was the conclusion of fresh analysis of satellite data tracking the flight.

He said Malaysia Airlines had told the families of the 239 people on board.

There were 227 passengers on flight MH370, many of them Chinese.

Relatives of those on board who watched the announcement at a Beijing hotel wept with grief, and some were taken away on stretchers by medical teams, news agencies reported.

In the past day, both Australian and Chinese air force crews have reported spotting debris.

The unidentified objects have been seen in separate parts of the vast search area, in some of the world’s most treacherous and remote waters.

The revelation by Prime Minister Najib Razak came at a late-night news conference in Kuala Lumpur.

It was based on new analysis by British satellite firm Inmarsat, which provided satellite data, and the UK’s Air Accidents Investigation Branch (AAIB). 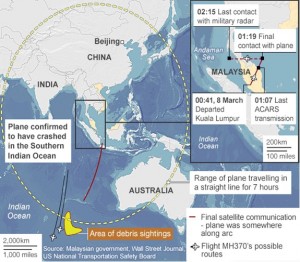 The firms “have concluded that MH370 flew along the southern corridor, and that its last position was in the middle of the Indian Ocean, west of Perth,” Mr Razak said.

“This is a remote location, far from any possible landing sites. It is therefore with deep sadness and regret that I must inform you that, according to this new data, flight MH370 ended in the southern Indian Ocean.”

Mr Razak appealed to the media to respect the privacy of the families of the passengers and crew, saying the wait for information had been heartbreaking and this latest news harder still.

The text message sent to families by Malaysia Airlines announcing the loss of the plane said: “Malaysia Airlines deeply regrets that we have to assume beyond any reasonable doubt that MH370 has been lost and that none of those on board survived… we must now accept all evidence suggests the plane went down in the Southern Indian Ocean.”